Is the H&K SP5 the Best Pistol Caliber Carbine Available On the Market? 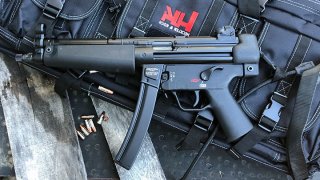 Here's What You Need To Remember: H&K brings the most mechanically up-to-date revision of the MP5 to civilians in the SP5. Turkish and Pakistani clones of the MP5 lack the later mechanical revisions implemented by H&K, based on 1980s versions of the MP5. The German manufacturer also brings superior quality control standards, while Turkish and Pakistani clones are made on imported German machinery

With the announcement of the H&K SP5, H&K has finally reentered the civilian MP5 clone market in the US. While the SP5K, an MP5K clone has been out for several years, most civilian shooters appear to be more interested in a proper MP5. Until now this demand has been filled by American manufacturers like PTR, or by imported guns from countries that have licensed MP5 production lines of their own, like Turkey or Pakistan.

But as H&K is the original manufacturer of the MP5, there is a lot of reputation that goes along with the brand. While H&K produced the HK94, a civilian version of the MP5 with a 16” barrel during the 1980s, imports of HK94s was halted in 1989 following George H. W. Bush’s semiautomatic rifle ban.

Due to changing German export laws and American gun control laws, H&K would be unable to important proper civilianized versions of the MP5 until 2019. But the latest SP5 isn’t just a reintroduction of the same old MP5 that was on the American market in the 1980s. The MP5 went through significant design changes for the military and law enforcement markets since then, and it appears that most of the new changes have been incorporated into the new SP5.

Though H&K probably planned for the 1980s MP5A5/MP5N to be the last variants of the MP5 before it was replaced by the UMP, continued demand for the MP5 lead to continued development on the design. One of the most substantial was the 1998 MP5F, an MP5 created for a French Gendarmerie contract. As the French planned on using increased pressure ammunition in their MP5s, the internals were revised and strengthened accordingly.

An excellent article in the January 2000 issue of Small Arms Review by the late Jim Schatz covers most of these changes. Many of these changes were additions and revisions to the MP5 stock, such as the addition of a rubber cover, right side sling loop, and various dimensional changes to make the stock better suited to most users. But as the SP5 does not have a stock, American consumers are not able to benefit from these changes. However, other ergonomic changes on the MP5F are present on the SP5. The longer, more curved selector lever is present on the SP5, allowing for easier actuation of the safety compared to older, shorter safeties.

It’s unsure whether the later revision to the MP5, the MP5 Mid Life Improvement, has any additional internal changes that were incorporated into the SP5. Not much is known about from the MLI apart from the HKey handguard, optional RAL coloring, and new HK scope mount, none of which are present on the SP5. Oddly, all MLIs seen at defense expos use the older shorter fire selectors instead of the extended MP5F selector.

Regardless, H&K brings the most mechanically up-to-date revision of the MP5 to civilians in the SP5. Turkish and Pakistani clones of the MP5 lack the later mechanical revisions implemented by H&K, based on 1980s versions of the MP5. The German manufacturer also brings superior quality control standards, while Turkish and Pakistani clones are made on imported German machinery. It’s doubtful that their quality control is on the same level as the original manufacturer.