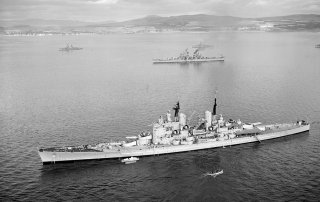 Here's What You Need to Know: Vanguard arrived too late for World War II but served in a ceremonial role as a symbol of power into the 1950s.

In an effort to take advantage of the superiority of the Royal Navy in World War I, First Sea Lord John “Jackie” Fisher developed a scheme to land British troops in Pomerania, thus directly threatening Berlin and forcing the Germans to withdraw troops from the Western Front. To this end, Fisher authorized the design of a group of shallow-draft “large light cruisers” that would carry guns heavy enough to support the landings. HMS Courageous and HMS Glorious would each carry four fifteen-inch guns in two twin turrets, while HMS Furious was expected to carry two eighteen-inch guns in single turrets. The light cruiser designation, incidentally, enabled Fisher to evade government restrictions on the construction of new battlecruisers.

The above is part of an ongoing National Interest series based on Robert Farley’s recent publication, The Battleship Book. The views expressed are his own.