Hold the Scrapyard: The Aircraft Carrier Isn't Done Yet 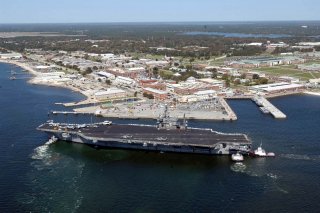 Here's What You Need To Remember: Following the Second World War, and the development of nuclear weapons and long-ranged bombers, there were fears that aircraft carriers were becoming obsolete. Happily, those fears were unfounded. Aircraft carriers have long served a crucial role - as a well-stocked mobile airfield - and this role is not going away.

A lot of ink has been spilled over the past decade or so concerning the viability of the aircraft carrier. Some regard its combination of expense and vulnerability to cruise and ballistic missiles as fatal to its continued utility. Supporters argue that a modern supercarrier’s size and design make it all but unsinkable, and that its power is key to the U.S. Navy’s ability to deter, to punish, and to defeat aggression. It is this author’s contention that the controversy is focused on the wrong thing: the carrier itself. Rather, it is the viability of its primary weapon system – the air wing – that should be at the center of analysis. When some do take on the air wing, it is usually to decry the lack of mission radius of modern strike fighters. But that also misses the point. Instead, what is it that the air wing, irrespective of the range of its aircraft, is supposed to do? That is a function of the ability of aircraft to penetrate to a launch point, and the ability of the weapons they deliver to achieve the effects needed. A valid discussion of those factors involves much more than just “bombs on target.”

Unfortunately, most if not all of the discourse taking on the matter of aircraft carriers focuses on the vulnerability or impregnability of the ship. The capability of the air wing to do something tactically, operationally, or strategically useful is either assumed or ignored. But it was precisely this consideration that formed the basis for justifying aircraft carriers in the first place, and the argument that won them a reprieve from the scrap heap after World War II.

Aircraft carriers were a consequence, not a cause. Admiral William Sims perceived the potential of aircraft-delivered bombs to sink battleships. He thus sponsored a series of wargames at the Naval War College after World War I to determine what it would take for sea-based aircraft to constitute a lethal offensive weapon. The insights gained in those games influenced the subsequent design of aircraft carriers. The presumed number of aircraft needed for successful attack against an enemy fleet drove design elements ranging from the mid-ship barrier to the size and number of aircraft carriers needed for a naval offensive. They were always regarded as vulnerable, as operations in the Pacific in World War II proved, but so long as their offensive power could be brought to bear, they were key to fleet success.

The development of nuclear weapons and ultra-long-range bombers posed an existential threat to the aircraft carrier. Soon after WWII leaders of the newly formed U.S. Air Force asserted that the combination of the B-36 bomber and nuclear weapons made the Navy’s aircraft carriers irrelevant. The Navy, for its part, designed a new class of aircraft carrier able to support the large aircraft needed to carry the massive nuclear bombs of the time. However, the USS United States, the lead ship, was cancelled by Secretary of Defense Louis Johnson, precipitating the “revolt of the admirals.” In pivotal Congressional testimony, Admiral Forrest Sherman and others made the case that the B-36 was too slow and vulnerable to reach its intended targets in the Soviet Union, but carrier aircraft had a much better chance. That argument for the strategic utility of a carrier air wing carried the day, and subsequently the USS Forrestal was authorized. In the arena of nuclear warfare logic, the aircraft carrier was regarded as consumable so long as it could reach its launch point before being sunk.

The conventional utility of sea-based tactical aircraft was demonstrated in the early stages of the Korean War. South Korean airfields were overrun by the North Korean army, so the only source of critical air support for troops on the ground were three aircraft carriers. They could function as airfields at sea, sacrificing their mobility because there was no threat to them at sea. The combination of being available when land-based air was not, and being ready on arrival since the carrier carried enough ordnance and fuel for a week’s operations, made the carriers valuable in a wide variety of situations.

This author’s experience as CO of a strike fighter squadron aboard USS Eisenhower in 1990 is also illustrative. Not long after Saddam invaded Kuwait, we passed through the Suez Canal into the Red Sea. We were convinced that we would be launching strikes into the Kuwait Theater of Operations (KTO) the next morning. The Air Force had already sent fighters into Saudi Arabia, but they had no ordnance, with their stockpiles in the UAE taking a week or more to reach the Riyadh-area airfields. We however had plenty of ordnance on hand, but were 670 miles from the KTO. The Air Force had positioned Air National Guard KC-135s in Jiddah on the Red Sea coast so we had plenty of tanking available. However, doing our time-distance calculations revealed that we could only keep six aircraft at a time in the area.

This points to the problem. A carrier air wing can bring power to bear when no other source of tactical air power is available, but only in limited quantities. If Saddam had decided to keep going south, would six aircraft have had any effect against his large army and hundreds of aircraft? What if we had started to lose aircraft, as we indeed at that time thought we would?  The loss of one or two planes per wave would have quickly reduced the air wing to impotence. The Doolittle Raid points to the other side of that logic. That raid was a “hit and run” operation for the carriers and a one-way ride for the Air Corps crews. However, despite its pin-prick nature, it had strategic effects all out of proportion to the extent it reinforced Admiral Yamamoto’s resolve to conduct the Midway operation, and it also boosted morale at home. The two faces of the strike coin reveal the opportunities and limitations of carrier-based air power. If one can define potential catalytic effects that can be achieved by strategically significant strike, also illustrated by the series of hit-and-run carrier raids on Japanese island airfields in 1942, and these potential effects are of sufficient strategic importance to justify the possible loss of a carrier ( as they were in the Doolittle case) then the investment in aircraft carriers supporting deep strike wings makes sense, if – and only if – those effects cannot be achieved with stand-off missiles.

If a greater, more sustained application of airpower is needed, then the carrier air wing is not a suitable weapon. The other element of that equation, noted previously in the Desert Shield example, is the application of power at range. Regardless of aircraft mission radius or the availability of aerial refueling, the farther the target, the fewer aircraft that can deliver their weapons unless, like the Doolittle Raid, it is a one-time shot. Moreover, any aircraft losses will rapidly deplete the air wing’s ability to support iterative, distant strikes. The advent of modern, lethal air defenses like the Russian S-400 and those aboard modern Chinese warships makes such losses more likely, and any “friction” in the form of mechanical failures or logistic shortfalls exacerbates the problem. The hand waves concerning the carrier air wing’s weaknesses are embedded in much of the discourse supporting the aircraft carrier, and serve to muddy the analytic waters.

In a potential war with China in the Western Pacific it is hard to conceive of a limited target set that could be hit with tactical carrier air power that would have the kind of strategic effects that would justify risking the loss of a carrier, such as the Doolittle Raid of 1942. One might make the case that the air wing’s ability to strike PLAN shipping might constitute such a justification. But to do so, the strike fighters would have to carry weapons like LRASM and thus become simply first stages to those missiles. In any case, the PLAN will soon have enough ships to make any kind of one-shot decisive strike like the Navy achieved at Midway a pipe dream. What kind of “calculated risk” message could a modern PACFLT or SEVENTH Fleet commander be able to credibly write to battle group commanders?

None of this means that aircraft carriers and their air wings are obsolete. Carriers, by virtue of their centrality in USN fleet design since 1942, have been used in many different methods connected with forward presence because they are what the Navy has. In peacetime and in cases of limited warfare, they have proven to be highly useful, which is why the demand for them by Geographic Combatant Commanders is so extensive. They can be moved around the globe like queens on a chessboard, responding to disasters, minor aggressions, and showing the flag either in threat or in support. They are big, impressive, and prestigious, which is why, despite their expense and presumed vulnerability, countries that can are either building or buying them. In the global presence arena, the issue of justification revolves around expense versus political effect.