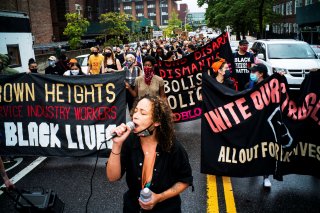 What makes Black people more likely than others to be killed, beaten, tortured and raped by white police officers and vigilantes? Although Black men are killed by the police more than any other group, Black women are regular targets of police violence even though this fact is often rendered invisible.

A culture and history of racist misrepresentation may have something to do with it. Why has there been considerable tolerance among the silent majority of white people for animal-like, demonic representations of Black people in media and popular culture?

The short answer is that we are dealing with a culture of domination. It is a culture that thrives on the sexualized demonization of Black people. Two examples of this are Ridley Scott’s Alien, which comports with the trope of Black women as alien breeders and Predator, written by brothers Jim and John Thomas, that riffs on images of Black men as dreadlocked, violent and superhuman.

George Floyd’s recorded and widely publicized killing as well as the killing of Breonna Taylor in her own home serve as catalysts for many white people discovering anti-Blackness and the reality of police violence. This reckoning asks that we examine the racist anti-Black cultural tropes that span art, politics and social control.

On March 13, Breonna Taylor, a nurse in training, was killed by Louisville, Ky., police officers in her own home after police broke in using what is known as a “no-knock” warrant. Some researchers count as many as 80,000 no-knock warrants every year in the U.S. — as many times as there are people at an average NFL game.

Until recently, there has been considerable complacency about police killing and raping of Black people. There is equally little effort to conceptualize in theoretically accessible ways how representations in cinema mesh with political racism.

The Black woman as an alien

Black women have been portrayed in contemporary white social and political culture as super-fertile and indestructible breeders whose sexual reproduction must be controlled. This is a shift from the slave-breeding campaign that emerged across the Americas after Britain’s abolition of the slave trade in 1807 and slavery in 1834.

This shift in public policy and white attitudes toward Black women’s sexual reproduction is evident in the U.S., especially with the 1965 Moynihan Report and 1970 Moynihan Memorandum. As part of the Republican Party’s Southern Strategy, Richard Nixon set in motion the myth of the Black welfare queen. This myth was later adopted by the Democrats.

It is now so fundamental a mythology in the white imagination that hardly any amount of contrary evidence can dislodge it. Enduring narratives about Black family pathology — particularly that of the overbearing and single Black mother — have led to damaging representations of Black women.

Ridley Scott’s Alien franchise, with its vicious and endlessly breeding carbon black alien mother, came at the height of neoliberal experiment and in the U.S. especially, an all-out assault on Black people. In the context of anti-Black culture, the film signifies the Black woman as an unkillable and ceaselessly breeding alien who threatened the body politic. In terms set by historian Lothrop Stoddard’s white supremacist 1920 book The Rising Tide of Color, a Black woman’s sexual reproduction is imagined to signal the genetic extinction of the white republic.

The Black man as predator

Black men and boys are imagined as dangerous, threatening, inherently criminal and superhuman — bigger, faster, stronger and less likely to feel pain. These views have roots in chattel slavery.

Canada is not innocent in the reproduction of this trope. Inspired by southern secessionists, Canada’s first prime minister, John A. Macdonald, claimed the death penalty would deter Black men from assaulting white women. Scholars David Austin and Greg Thomas both demonstrate that in the 1960s and 1970s, the RCMP and the U.S. Federal Bureau of Investigation were obsessed with Black men’s sexual prowess.

In the U.S., anti-lynching campaigner Ida B. Wells and, subsequently, writer and scholar Angela Y. Davis documented how the myth of the Black-man-as-rapist undermined African-Americans’ economic, social and political position.

The idea that the late George Bush Sr. may have defeated Michael Dukakis in 1988 by promoting the Black-man-as-rapist trope shows how deeply this myth is embedded in popular culture. The idea of Black boys and men as super-predators was also expressed by Hilary Clinton in 1996. Clearly, the current culture of aggressive and militarized policing that kills Black people at three times the rate of white people in the U.S. crosses political lines.

In the context of racially charged white anxieties about immigration and social order, the historical demonization of Black men is a trope, a stereotype, that easily maps onto cinematic typecasting. The 1987 Hollywood film that launched the Predator franchise fits this pattern.

Predator depicted a Black, dreadlocked, large and super-virile male in a way that converged white art with white political history. A white man once said he thought it was cool that I had dreadlocks like the Predator. This is not a compliment.

The police rape, torture, castrate and murder Black men. The link between visual culture and anti-Black, racist, dog-whistle politics reveals that these violent, racist behaviours strikes deep at the heart of white psychosexual fears and pathologies. Black men are imagined as predators who must be controlled, if not eliminated with extreme prejudice.

How do we move beyond these harmful anti-Black tropes?

At a minimum, I suggest at least three actions.

First, there must be candid admission that there is both sexualized fear of and desire of Black people. The fear shows up viscerally, or in an unconscious recoil, when a white and Black person share the same space.

Second, there must also be an admission that Hollywood and the media paint Black people as sexualized, superhuman monstrosities and that this meshes with racialized political discourse.

Finally, more white people need to critically examine their whiteness. Well-known white scholar and writer Noel Ignatiev’s called for whiteness to be abolished: this call should ring true and is necessary if we are to see an end to the psychosexual and racist pathologies that prevent Black people from being able to breathe.