Hooray! There's a Coronavirus Vaccine. Now, Who Gets It First? 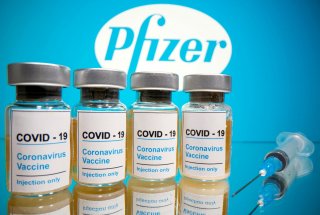 Not long after Pfizer and BioNTech announced in a press release that their COVID-19 vaccine candidate has over 90% efficacy, British politicians began discussing an imminent roll-out – before Christmas, according to health minister Matt Hancock. On the other side of the English Channel, France is also poised to roll out the vaccine, only in a different way.

In the UK, the government has adopted the advice from its Joint Committee on Vaccine and Immunisation (JCVI) on who should get the vaccine first. In the event of the vaccine being approved, the JCVI has proposed a strategy of prioritising mainly according to age (starting with the oldest first), as well as health and social care workers (see table below).

While there are some similarities with the UK strategy – such as healthcare workers given high priority – there are also substantial differences. A key difference is that the French guidelines prioritise high-risk occupations, including shop workers, school staff, transport staff such as taxi drivers, hospitality workers and abattoir staff.

Why the Different Approaches?

In the UK, the JCVI argues that age-based programmes are easier to deliver and so tend to have a higher vaccine uptake. Certainly, if you are going to choose a single factor, age is a very good one because your risk of dying of COVID-19 doubles roughly every five years.

Beyond age, many other factors have also been found to place a person at a higher risk of death from COVID-19. Having a chronic condition, such as diabetes, is roughly equal in risk to being five to ten years older. Assessing someone’s likelihood of getting severe COVID, using an algorithm that accounts for several risk factors, could help to ensure that the vaccine is more precisely targeted towards those likely to most benefit in each age group.

Hence there is a trade-off between the potential gains in uptake from using a simple age-based prioritisation versus greater protection of the most vulnerable from a more targeted approach.

Here we can learn from evidence on the uptake of the flu vaccine, which is also targeted at older people (those over 65). Importantly, uptake is not uniform with a universal age-based programme – people who are poorer are much less likely to be immunised. So a challenge with the UK’s strategy will be to find ways to make it easier for disadvantaged groups to access the vaccine, or risk increasing health inequalities.

This is where we come to France’s approach of targeting higher-risk occupations.

During the first wave, COVID-19 deaths were particularly high among certain occupations. As the chart below shows, some occupations, such as chauffeurs and taxi drivers (which are priority occupations in the proposed French allocation system), had higher rates of death than healthcare workers. Notably, many such workers below the age of 50 are not explicitly mentioned in the UK vaccine allocation plans.

A factor that both the French and UK committees now need to consider is that a COVID-19 vaccine is likely to be introduced during the second wave of the pandemic in which there is considerable regional variation in rates of transmission. The chart above also shows the differences in rates of death in the first wave between London and other regions. Lives could potentially be saved by targeting the initial vaccine doses to the regions with the most cases.

In contrast, the French government is now engaged in an extensive process of public consultation to inform prioritisation. In part, this aims to avoid the low uptake of previous vaccine programmes, such as for the 2009 H1N1 pandemic. This process involves including relevant sectors of the population in the design of vaccine allocation strategies, learning what people prefer, and using this information to communicate the strategy to the public effectively.

This sort of consultation takes time, but a potential advantage is that it helps governments understand what people value. It also helps further refine a prioritisation policy and communication strategies, which in turn may increase the likelihood of people supporting the vaccine allocation guidelines and thereby promoting uptake.

It is clear, even from reviewing the policies of just two governments, that there are many possible COVID-19 vaccine prioritisation strategies. As a recent COVID-19 vaccine allocation framework suggests, these strategies can be evaluated against different criteria, potentially with input from the public. While it appears that we have an effective COVID-19 vaccine, it will be a far better thing if we allocate it fairly and efficiently