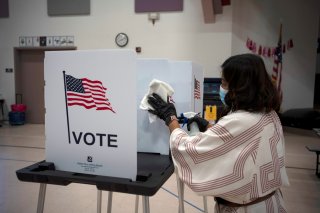 Georgia voters faced long lines and malfunctioning voting machines throughout the day Tuesday as they went to cast their ballots in the state’s primary election, CNN reported.

Most of the difficulties were in the Atlanta metro area, where election officials attributed the challenges to the pandemic, inexperienced poll workers, and the influx of mail-in ballots, though some voters asserted that the voting machines themselves have not been working, according to CNN.

“It was after 7:30 when we went inside the voting area only to be told the machines were down,” voter Monica Hickman told CNN. “When it’s time to vote, everything should work properly because we’re living in critical times and this is one of the ways our voices can be heard.”

Nikema Williams, the chairwoman of the Georgia Democratic Party, expressed her frustration at the situation and called it a “hot mess,” The New York Times reported. “How do you not have a voting machine?” Williams said to the Times.

Gabriel Sterling, Georgia’s voting implementation manager, told CNN that the issues were “a function of counties engaging in poor planning, limited training, and failures of leadership.”

Both the secretary of state and the speaker of the state house have called for investigations into debacle Tuesday afternoon.

“My office has opened an investigation to determine what these counties need to do to resolve these issues before November’s election,” Republican Georgia Secretary of State Brad Raffensperger said in a statement to CNN.

Georgia House Speaker David Ralston also initiated an investigation Tuesday’s election, with a particular focus on Fulton County, much of which includes Atlanta.

In addition to the challenges brought by the coronavirus, voters were also burdened with standing outside for over an hour in temperatures in the mid-80s, with humidity reaching 90%.

Postponed twice already due to the coronavirus pandemic, Georgia’s elections Tuesday include a presidential primary and 15 congressional primaries, one of which is for a competitive senate seat that Democrats hope to flip in November.