How to Achieve Nuclear Disarmament, According to Two Pan-African Giants 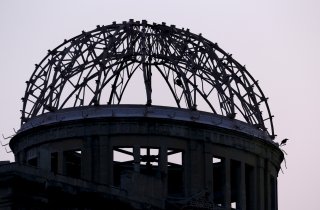 This year marks the 75th anniversary of the bombing of Hiroshima and Nagasaki by the US in 1945, the only time in history that nuclear bombs have been used.

The atomic bombs killed tens of thousands of people instantly, with many others succumbing to horrific wounds or radiation sickness days, weeks, months and years afterwards. Subsequent generations, born to the survivors, suffered birth defects. The two cities were just about flattened.

There are at least two traditions of African thought on nuclear weapons, traceable to their most vocal exponents: Kwame Nkrumah, the scholarly first president of independent Ghana, and Ali Mazrui, the renowned Kenyan scholar.

Both Nkrumah and Mazrui associated nuclear weapons with imperialism and racism, but proposed different approaches to address the problem they present. Nkrumah’s was an abolitionist non-violent approach. He argued for nuclear non-proliferation and disarmament and saw nuclear imperialism as the exploitation of smaller states and indigenous people and territory for nuclear tests and uranium mining.

Mazrui, on the other hand, argued for nuclear proliferation before nuclear disarmament could take place. His view was that the dominant policy towards nuclear weapons afforded some states the political privilege of having them, while denying this right to others. What he called nuclear imperialism.

Nkrumah’s approach arguably became the African approach to nuclear weapons. As a leading member of the Non Aligned Movement, Africa’s participation in the global nuclear order was directed through the organisation in the pursuit of nuclear disarmament. Closer to home, the achievement of an Africa Nuclear Free Zone treaty in 2009 was a direct outflow of Nkrumah’s approach.

I argue that to end nuclear imperialism, African states have to reconcile Nkrumah’s and Mazrui’s approaches to nuclear weapons.

Tackling nuclear imperialism would require African countries to sign up to the Treaty on the Prohibition of Nuclear Weapons, or the Ban Treaty, of 2017. This treaty is a first step toward eliminating the weapons themselves and the systems of control and exploitation they make possible. African states participated in the treaty process. More than 20 have signed the treaty and five have so far ratified it.

It would also require African states to withdraw from the Nuclear Non Proliferation Treaty. All African states are currently members of this treaty. But, after 50 years in existence, there is little hope that it will deliver genuine nuclear disarmament.

Reconciling Nkrumah’s idealism and Mazrui’s realism helps us see these treaties for what they are: the Ban Treaty is based on humanitarian concerns and the equality of states; the Non Proliferation Treaty legalises a few states’ nuclear hegemony indefinitely.

It is time for African states to lead in creating a new non-nuclear order.

Where Both of Them Stood

An internationalist and pan-Africanist, Nkrumah saw abolition as the answer to nuclear weapons. He saw them as the “sword of Damocles” hanging over humanity. Embedded in the global peace movement of the time, he advocated for “positive action” – an outflow of Gandhiist non-violence. He attended and hosted several conferences with an anti-nuclear agenda, including an assembly in 1962 on the theme “A world without the bomb”.

Although many Africans lost faith in the value of non-violence and preferred a military solution to imperialism, Nkrumah’s approach to nuclear weapons did not fade. It was enmeshed with the position espoused by the Non Aligned Movement, and was the position adopted by the African National Congress in South Africa in 1994.

For his part, Mazrui believed African states should not pursue a nuclear weapon free zone and should leave the 1970 Nuclear Non Proliferation Treaty.

Mazrui saw the Non Proliferation Treaty as a trap that smacked of racism, where major powers got to say “such and such a weapon is not for Africans and children under 16”.

Mazrui was thus “advocating nuclear proliferation as the only realistic path to nuclear disarmament. This was a total inversion of the Western consensus.”

The five nuclear powers have wasted many opportunities to negotiate the nuclear disarmament that the 50-year-old Non Proliferation Treaty binds them to. Instead, key nuclear arms control treaties have been discarded and all the nuclear weapon states are modernising their arsenals.

The treaty has also not stopped proliferation: four other states have since acquired nuclear weapons – Israel, India, Pakistan and North Korea.

Mazrui was right. In practice, the treaty is at most a status quo treaty that has come to legalise a small club being able to wield nuclear weapons – what India calls nuclear apartheid.

The treaty is not just about separating states into haves and have nots; it is also a stick to beat the have nots into submission.

The efforts of the majority of states that went outside the Non Proliferation Treaty forum to negotiate the Treaty on the Prohibition of Nuclear Weapons three years ago, to make nuclear weapons illegal for all, without exception, need to succeed. The Ban Treaty will enter into force when 50 states have ratified it. The number currently stands at 40.

The Ban Treaty was only possible because of a broad international coalition emphasising the unacceptable humanitarian consequences of nuclear weapons.

To end nuclear imperialism, African states have to reconcile Nkrumah and Mazrui’s approaches by not only joining the Ban Treaty, but also withdrawing from the Non Proliferation Treaty. This will signal that African states will only take part as equals in global nuclear governance where these weapons are illegal for all.