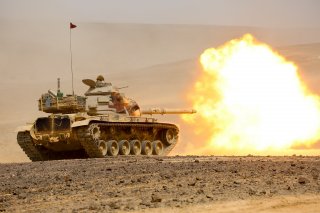 Here's What You Need To Remember: A mix of air dominance and very effective tank battles won the day.

During the Gulf War thirty years ago, a massive U.S. air attack eliminated Iraqi aircraft, air defenses and large portions of its command-and-control infrastructure, paving the way for a large-scale ground invasion which ultimately liberated Kuwait.

“The Iraqis saw these amphibious maneuvers because that is what we wanted them to see,” Gulf War A-10 pilot, now retired Air Force Maj. Gen. Paul Johnson, (former) Director of Requirements for the Deputy Chief of Staff for Strategic Plans and Requirements, told The National Interest in an interesting anniversary special interview in 2016 at the 25th Anniversary of the Gulf War.

However, there were some famous tank battles in the open desert during the ground attack, wherein U.S. Army Abrams tanks fought against Iraqi Army T-72s. U.S. Army tanks destroyed large numbers or Iraqi tanks and fighting positions—in part because advanced thermal infrared imagers inside U.S. Army M1 Abrams battle tanks enabled crews to detect the signature of Iraqi tanks without needing ambient light. These tank battle victories, therefore, were in part simply defined by sensors and range, as U.S. tanks could target, fire upon and destroy Iraqi tanks without being seen.

Although this gave U.S. forces an advantage—as the Army was overwhelmingly victorious in Desert Storm tank battles—there were some tough engagements such as the Battle of Medina Ridge between the Army’s 1st Armored Division and Iraqi Republican Guard forces. In retrospect, those tank battles came to be known as both historic and defining, and it would not seem completely surprising to see how they may have inspired subsequent technical enhancements to the Abrams tank, which include the addition of newer kinds of long-range, high-resolution Forward Looking Infrared sensors. This kind of C4ISR dynamic aligns with other key elements of Gulf War successes to include the advent of certain kinds of GPS-precision targeting, force tracking technology and, perhaps most of all, the combat debut of stealth in the form of the F-117 Night Hawk.