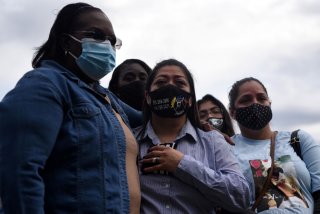 Addressing vaccine hesitancy among Black communities is as complex as fighting the pandemic. That’s because just as the SARS-CoV-2 virus evolves, so does hesitancy.

In the first wave of the pandemic, when the virus was shown to be affecting certain ethnic groups disproportionately, one solution proposed by the medical profession was to start the vaccine roll out with the most vulnerable communities, including people from Black, Asian and minority ethnic groups.

This caused concern among these communities, because they are not normally at the front of the queue when it comes to the best medical treatments, particularly those in lower socioeconomic classes. Some people began to speculate that it was because it was an experimental vaccine and Black people were being used as guinea pigs.

For some people, this will have triggered alarm bells and brought up the many historical examples of Black people being used for experimental or unethical medical treatments. The debate took place during the international reckoning over racial inequalities sparked by the killing of George Floyd. So people likely felt empowered to ask questions about the testing and safety of the vaccine, and many more will have learned about the historical context which heightened the suspicion.

People may have also begun to reflect on their own medical treatment and that of their families. It’s well established that Black people tend to experience much poorer medical outcomes than the rest of the UK population for conditions such as heart and kidney disease, blood pressure, diabetes, certain cancers, and death during pregnancy. Black people have also historically been under-prescribed pain medication and are more likely to be institutionalised for mental health problems.

All these factors may have meant that, in 2020, many Black people could not just say yes when asked if they would take a new, unlicensed vaccine without asking questions. As a Black person, to do so at this time would be to show your ignorance of what has been established as historical and current systemic medical racism.

What Black people needed was reassurance delivered by individuals who they respected and could trust. For structural and political reasons, including the lack of Black scientists at the highest levels of decision-making, this did not happen and so the hesitancy has persisted.

In phase two of the pandemic, we now have vaccines that have been tested, proven to be safe, effective, and approved by authorities around the world. Millions have been injected in countries as diverse as the UK, USA, Israel, and India without any serious adverse effects.

But COVID-19 vaccine hesitancy has now evolved, and is being driven by anti-vaxxers who have weaponised the concerns of BAME communities based on genuine historical events by adding others relating to baseless claims that vaccines could, for example, violate religious laws or affect fertility. This new, more “transmissible” hesitancy is more difficult to counter with factual arguments because it’s based on speculation, and new false information is added daily.

More worrying is that as the reports of vaccine hesitancy become more widespread in the media, more people may refuse to be inoculated – not just Black people. In my experience participating in forums on vaccine hesitancy, I have seen that, for some individuals who do not have support, the conflicting information is causing significant distress that they struggle with what to do. What is worse is that for all the while they hesitate, they remain at increased danger from the virus – an epidemiological double whammy.

To reverse the situation, we need to look back to the height of the first wave of the pandemic when, driven by an outcry from the Black community, Public Health England produced a review of the disproportionate deaths. The report’s chair, London’s regional director for Public Health England Professor Kevin Fenton, made several recommendations around tackling structural racism in medical and public health provision.

Structural problems have meant that too few Black scientists, medical and public health professionals are in positions of influence and power where they can identify problems through research and then communicate solutions. This is what is lacking now. Such individuals would have greater traction with the hesitant members of the Black community.

But the current UK government does not like to acknowledge structural racism, which is not only misguided but will increase mistrust and hesitancy.

We have to understand that anti-vaxxers are against vaccination itself. They will never accept any vaccine is safe. To beat them we must instead convince the hesitant individuals of the personal and societal benefits of taking the COVID-19 vaccine. Simply attempting to prove it is safe by debunking myth after myth may not work, as there will always be another scare story.

The ease with which COVID-19 vaccine hesitancy took hold confirms that in the long term, there is much more work to be done to regain the trust of people who have many good reasons to be sceptical of the medical system.