How Artificial Intelligence Enables Lasers to be Weapons of the Future 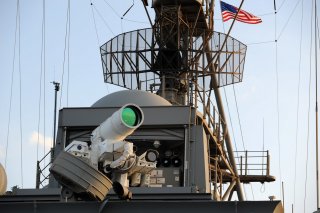 The Navy is advancing rapidly with the development and integration of high energy laser (HEL) weapon systems onto ships to support the ship self-defense mission. HEL systems offer novel hard-kill and soft-kill engagement options with targeting accuracy and narrowly focused speed-of-light lasing with a relatively low cost per shot. HEL hard-kill engagements provide a more traditional weapon function of burning through the target to cause enough damage to render the threat useless. HEL soft-kill engagements offer “softer” options of blinding threat sensors and optics, rather than complete destruction.

HEL systems differ significantly from traditional kinetic shipboard weapon systems. Laser weapons concentrate a very highly focused beam of coherent energy on targets at a distance. They must have line of sight with the threat target. Although the laser beam travels at the speed of light, the beam must “dwell” on the target for a period of time long enough to induce soft or hard kill effects. Environmental and atmospheric effects can greatly affect laser beams, diminishing the amount of irradiance that makes it to the threat. Laser weapons require significant amounts of power, and when facing threat situations that require longer dwell times or multiple engagements, operators may need to make sure that sufficient power is available.

Operating laser weapons is a complex endeavor. Figure 1 identifies the many characteristics of HEL operations that lead to complexity in this decision space. At the outset, tactical operations for defensive missions have inherent complexity: threats are often unexpected and offer a very limited reaction time, situational awareness is often incomplete and uncertain, the environment is dynamic and changing rapidly, human operators can become overwhelmed with information, uncertainty, and decision options, and the consequences can be dire.

Laser weapon systems contribute additional complexity to the operator’s decision space. The operator must weigh many factors within the dynamic threat situation to choose a soft-kill or hard-kill option, select an effective target aimpoint, calculate the required laser power-in-the-bucket (amount of actual laser irradiance per area that makes it to the target) and calculate the required dwell time. The operator must consider environmental effects and must determine if enough power is available to support the engagement. The operator may also decide to use an existing kinetic weapon system instead of a HEL system depending on a comparative prediction of kill success.

During combat operations, a ship’s warfare operators will make critical kill chain (weapon engagement) decisions under highly time-critical and uncertain conditions. Figure 2 illustrates an example of a ship’s tactical operations picture in a situation involving UAV threats. In this scenario, the operators must weigh what is known about the threat with what the ship’s defensive weapon systems are capable of. In this example, the operators must predict and compare how successful the Sea Sparrow, the laser weapon system (LaWS), and the Phalanx CIWS will be against the threat UAVs. The threat’s proximity and incoming speed will dictate how much time the operators have to make these comparative predictions. In many cases, the human operators may be well-served with an automated decision support system that can quickly calculate preferred weapon options based on the situation, such as doctrine statements. The emerging capabilities of artificial intelligence can be leveraged to enable automated decision aids for laser weapons—thus creating a cognitive laser approach for laser weapon systems.

Two emerging technologies lead to the cognitive laser concept: laser weapon technology and artificial intelligence. The Navy has been researching laser technologies for decades and lasers have recently matured to the point where they are being integrated and tested on ships for operational use. In parallel with this evolution, there have been significant advances in artificial intelligence (AI)—particularly in the development of intelligent computer systems that can support complex decision-making. The marriage of these two emerging technologies is the genesis of the proposed cognitive laser concept.

Laser weapon systems and their use in the defense of naval ships presents a complex decision space for human tactical warfare operators that requires the assistance of AI to process, fuse, and make sense of large amounts of data and information in short timeframes, and to develop and evaluate effective courses of action involving complex systems (including laser weapons). The laser weapon kill chain requires the intuitive, adaptive, and creative cognitive skills of humans as well as the abilities of automated systems to rapidly fuse large amounts of disparate data, construct and assess vast permutations of options, predict performance, and deal with uncertainty. Automation, artificial intelligence, and machine learning can provide a human-machine teaming cognitive solution.

Graduate students at the Naval Postgraduate School (NPS) have been studying various aspects of the cognitive laser concept. A systems engineering capstone team developed Figures 3 and 4 as they developed a conceptual design of an automated decision aid to support laser weapon engagement decisions for a naval shipboard HEL system (Blickley et al, 2021). Figure 3 presents a context diagram illustrating how the decision aid might retrieve threat information and laser resource information from onboard sensors and weapons scheduling in order to develop engagement recommendations and provide these to HEL operators.

The capstone team performed a functional analysis of the conceptual cognitive laser decision aid. Figure 4 contains a functional flow diagram from this analysis. It highlights some of the decision factors involved in determining whether or not to fire an HEL system: if there is sufficient time, if atmospheric conditions are favorable, if there is sufficient power, if the threat’s material composition can be effectively lased, and if there are no deconfliction issues (if there is no risk of friendly fire in the path of the laser beam).

NPS SE thesis students are studying other aspects of the cognitive laser concept. One study is widening the scope of the problem beyond laser weapon system decisions (Carr 2021). This study is asking the broader question: how do warfare operators on ships make the determination of which weapon to select when they have kinetic weapons and laser weapons to choose from? For this higher-level kill chain function, the operator needs to be able to compare the predicted performance of the kinetic weapon with that of the laser weapon for a given threat scenario. The threat is not stationary—as it moves, the range between the weapon and target changes and therefore the amount of “atmosphere” that the laser beam must traverse changes. Real-time changes in the threat’s proximity and kinematics continuously affect the projected performance of the two types of weapon systems differently. Weapon operators will be more familiar with when and how to engage a dynamic threat with kinetic weapons. They may be less familiar with the intricacies of engaging a dynamic threat with a laser weapon. The required laser’s dwell time and power needs will change as the threat moves and maneuvers. The complexities of a projected performance prediction between the two different types of weapons warrants the use of AI and automated decision aids to support this complex decision space.

As threats advance in complexity, naval operators will need to use laser weapon systems in more sophisticated and complex operations. NPS is studying the use of laser weapons to defend against future swarms of drones (Taylor 2021). The study is first characterizing possible drone swarms—their configuration, the number of drones, and the types of drones. The study is exploring the capabilities of laser weapons to address the swarms—soft-kills, hard-kills, and engagement timelines to understand how many drones can be addressed in a given situation. The study is developing strategies to apply different engagement logic to different threat scenarios—a series of soft-kills, or strategic hard-kills, or combinations of lasing and using kinetic weapons, as examples. The rapid development of effective laser weapon engagement logic in such complex tactical situations will require a cognitive laser approach to aid laser operators.

Tactical energy management, as illustrated in Figure 5, is a cognitive laser concept for allowing laser weapon operators to understand and manage the dynamic energy resources during tactical operations. Laser weapons require significant amounts of energy when they are fired, and energy is a constrained resource on ships. This concept taps into the power sources on a ship to give laser operators insight into how much power is available and to determine how much power will be required to defeat specific threats as they are encountered.

Machine learning is an AI method that involves computers “learning” effective solutions or answers by training them using great amounts of data or scenarios. Recent research projects at NPS have been studying the use of machine learning approaches for determining the required dwell time based on the properties of the material composition of targets (Blickley et al 2021) and for target selection and engagement strategies against drone swarm threats (Edwards 2021). From the operator’s perspective, a machine learning algorithm would enhance a real-time decision aid by providing an expert-level laser weapon system knowledge base as shown in Figure 6. As real-time sensor data provides information about the threat—its location (or locations for a swarm threat), kinematics, and characteristics, the decision aid can assess and predict the target type, location of components (fuselage, sensors, seekers, etc.), material composition and thickness. This information is compared with the machine learning knowledge base which produces accurate recommendations for engagement strategy, aimpoint selection, and laser dwell time.