How Artwork Shows What the 6th-Generation Fighter Can Do 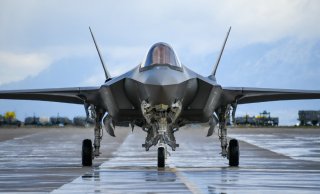 Last September, the U.S. Air Force shocked the world with the announcement that they had already designed, built, and tested an aircraft designed under their NGAD fighter, or Next Generation Air Dominance, program. The idea that America might already have a 6th generation fighter waiting in the wings caught the world’s attention, but in the months since, many have come to believe that the aircraft that was tested wasn’t a mature fighter design, but was rather a technology demonstrated used to assess the performance of systems destined for an NGAD fighter.

None the less, these tests mean the Air Force has clearly made some significant progress on what is to become the NGAD fighter, making it all the more miraculous that the American people have yet to learn much at all about this aircraft slated to replace the dogfight-dominating F-22 Raptor. Like the B-21 Raider being developed by Northrop Grumman, the NGAD fighter is an open secret: The world knows it’s coming, we just still don’t know what it’ll be capable of.

So, what do we know about the NGAD fighter? Well, there are some things we can glean through official artist’s renderings and their associated descriptions, and there are other things we can extrapolate based on the capabilities of its long-term competition in China’s J-20 and Russia’s Su-57 stealth fighters. By putting these two groups of assertions together, we can develop a somewhat robust idea of what the NGAD fighter will be expected to do, and how it might go about doing it.

Watch: What can artist’s renderings tell us about the NGAD fighter?

In this video, I break down some of the official images of the NGAD fighter (artist’s renderings) that have been released by the U.S. Air Force in various documents. Then, I compare those images to ongoing aviation trends and previous stealth aircraft prototypes to draw conclusions about what this jet may really look like.

You can read the full article this video was based on, here.

In many of these renderings, the NGAD fighter looks to have adopted a triangular or wedge-shaped design that forgoes the presence of a traditional vertical tail. While both the F-22 Raptor this jet will replace and the F-35 Joint Strike Fighter America continues to pump out of Lockheed factories do have fairly traditional tail sections despite their stealthy designs, the idea of a stealth fighter that lacks a vertical tail is not at all without precedent.

In fact, Northrop Grumman’s famed YF-23 Black Widow II, which competed with and lost to Lockheed Martin’s F-22 Raptor for America’s last air superiority fighter contract, famously performed as well or better than the Raptor in a number of important categories (including stealth and range), and it too lacked a vertical tail. Today, Northrop Grumman is under contract with the Air Force to produce the forthcoming B-21 Raider, widely believed to be the most advanced stealth bomber in history, so it’s not out of the question to suggest that Northrop may also be competing for a chance at the NGAD fighter using an updated design that shares some commonality with the aforementioned YF-23.

In fact, even Lockheed Martin has released artist’s renderings tied to the prospect of a 6th generation fighter that look strikingly like Northrop’s YF-23 design.

You can read our full coverage on the incredible YF-23 Black Widow II in our feature on it here.

Other facets of the NGAD fighter, like storing ordnance internally, carrying its own electronic warfare capabilities, and leveraging advanced engines meant to increase power and efficiency while further limiting infrared exposure can all be seen in the most recent images tied to the program released earlier this month.