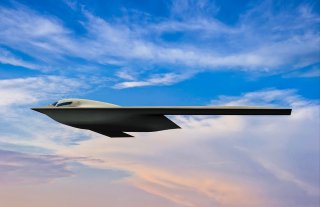 Here's What You Need to Know: Instead, the U.S. would likely keep the fighting at sea, blocking China’s access to the global market and using stealth aircraft like the B-21 first to disrupt China’s anti-ship capabilities, and then closing with Chinese shores enough to begin launching sorties of strike aircraft aimed at pounding China’s military and industrial infrastructure into submission.

The U.S. Navy is working to counter China in the Pacific, but it could be the Air Force’s B-21 Raider that really shakes things up.

In recent years, the United States Navy has dramatically increased the frequency of Freedom of Navigation Operations (FONOPS) in the South China Sea. This increase in Pacific activity can be directly attributed to China’s aggressive behavior throughout the region, working to enforce their illegal claims of sovereignty over the heavily trafficked portion of ocean.

The South China Sea, a stretch of ocean that lies between Vietnam and the Philippines, is subject to numerous overlapping claims of ownership, many of which are backed by international law and commonly accepted norms. That is, except for China’s claim, which extends thousands of miles beyond the traditionally recognized economic exclusion zones each nation can claim within 200 miles of their coast, and is bolstered by both capturing and creating new islands in the region.

China’s claim over this region, they say, is backed by historical precedent, but international courts have ruled those claims to be unlawful. China has since responded by rapidly expanding its navy and bolstering the number of ships in both its Coast Guard and even its maritime militia. Combined, these forces offer China hundreds vessels in the region, many of which are used to physically deter other nations from access to large swaths of ocean. This behavior has forced Vietnamese workers off of oil rigs in their own territorial waters, pushed fishing firms out of their nation’s economic exclusion zones, and have created a significant amount of tension among Pacific powers, and even nations as far away as Europe.

That’s where Freedom of Navigation Operations come in. South China Sea FONOPs are voyages of military vessels through stretches of ocean that China considers their property, but that the rest of world recognizes as international waters. The United States and a number of other nations conduct these operations specifically to reinforce international norms, and to physically represent a dismissal of China’s illegal claims. However, as tensions between China and other global powers continues to mount, emerging hypersonic technologies promise to give China a seemingly indefensible advantage.

China has a massive stockpile of ballistic and cruise missiles at their disposal, including more than one hypersonic missile platform. Hypersonic missiles have become the source of the latest arms race, with China, Russia, the United States, and recently, Japan all rushing to field missiles that are capable of achieving hypersonic speeds–in order to be considered hypersonic, a missile must be able to sustain flight at speeds in excess of Mach 5.

The incredible speed Chinese missiles like the DF-17 and and CM-401 can achieve make them nearly impossible to intercept and offers a massive amount of kinetic energy transfer upon impact. In other words, these missiles could likely take down many navy vessels through sheer power alone, without the need for an explosive warhead. Of course, the addition of a warhead makes these platforms all the more dangerous.

While the CM-401 is considered a short-range anti-ship cruise missile, the DF-17 boasts hypersonic speeds and a range that could extend out to one thousand miles from Chinese shores. At that distance, reliable targeting becomes a significant hurdle, which had led China to develop a supersonic drone built specifically to offer up-to-the-minute targetting data of enemy ships as the DF-17 closes with its target.

The U.S. Navy, and indeed America, relies on a fleet of Nimitz and Ford-class super carriers as a potent form of force projection. Each of these carriers boasts dozens of aircraft and thousands of troops, allowing them to bring more firepower per carrier strike group than many entire nations can field. However, these hulking airstrips at sea offer China a sizable target for their hypersonic anti-ship missiles.

The F/A-18 Super Hornets and F-35C Joint Strike Fighters America can field aboard carriers have a combat radius of only about 500 miles, which means America’s carriers can’t get to within striking distance of Chinese shores without putting themselves at significant risk of being hit by China’s hypersonic missiles. A number of efforts are underway to extend the range of each carrier’s firepower, but these initiatives have been characterized by some as stop-gaps that may help in a conflict, but that don’t effectively offset China’s hypersonic advantage.

And that’s where the Air Force just might save the day. Their newest bomber, the Northrop Grumman B-21 Raider, is expected to enter service in the mid-2020s and promises to be the most advanced stealth bomber ever built. Northrop Grumman has done an excellent job of keeping secrets associated with the B-21, but some things are fairly safe to assume: this new bomber will be able to avoid detection like no bomber ever has before it, it will have global-strike capabilities, and it would likely lead the way in a high end conflict against a nation like China.

While F-35C’s might be able to avoid detection to close with Chinese missile platforms on shore, they wouldn’t have the range to reach their target, destroy it, and return to the ship… but B-21’s almost certainly could.

The diplomatic leverage of military power

It’s important to note when considering the development on new military capabilities that they actually offer value in two different realms of international disputes. While the obvious value the B-21 offers will be in its combat capabilities, the second order effect of that capability is diplomatic leverage. This leverage is the basis of “big stick ideology,” or an approach to international relations built on Teddy Roosevelt’s foreign policy axiom: “speak softly and carry a big stick.”

Without the big stick, speaking softly to diplomatic opponents doesn’t tend to get very far, but with a big stick like the B-21 Raider on hand, America’s enemies are forced to listen, lest they run afoul of the “big stick ideology” and are met with the fighting end of it. By establishing the B-21 Raider as a platform that can neutralize China’s hypersonic anti-ship arsenal, China will be left with two options: calling America’s bluff and going to war, or acknowledging the strategic advantage America’s new stealth bomber offers, and staying seated at the negotiating table.

Because so much of the global economy is reliant on Chinese and American markets, neither nation stands to benefit from war, but both nations benefit from posturing about it. China’s anti-ship weapons give it the leverage it needs to be forceful when negotiating with or disregarding the complaints of foreign powers. The B-21 Raider could redistribute that perceived power more evenly between opposing forces, and mandate a greater level of cooperation.

There are some hurdles that would need to be overcome first. In order to know where China’s advanced anti-ship assets are, America will likely need to rebuild its intelligence network within China. Starting in 2010, China gained access to a secure CIA communications system that allowed them to systemically identify and execute CIA informants, crippling America’s intelligence gathering capabilities within their nation. It seems likely that identifying hypersonic targets will require a combination of reconnaissance and human intelligence gathered from within China.

Of course, if relations with China were to degrade into war, the United States would likely not wish to deploy troops to China’s mainland, where the largest standing army on the globe would give China a significant advantage. Instead, the U.S. would likely keep the fighting at sea, blocking China’s access to the global market and using stealth aircraft like the B-21 first to disrupt China’s anti-ship capabilities, and then closing with Chinese shores enough to begin launching sorties of strike aircraft aimed at pounding China’s military and industrial infrastructure into submission.

Until the U.S. Navy can field an entirely new carrier-based fighter with a dramatic increase in range, China’s anti-ship missiles give them the upper hand in a potential conflict with America’s Navy… but thanks to the support of America’s Air Force, that clear advantage may be short lived.