How The Battle Of Cannae Sent Rome Into A Total Panic 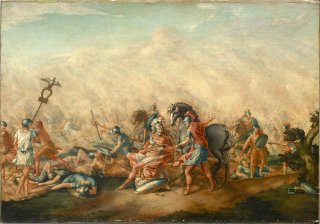 One of the most pivotal battles in Western history, the Battle of Cannae, was fought 2,232 years ago to the year. The Battle of Cannae occurred on August 2, 216 BCE in southeast Italy between Carthaginian forces led by Hannibal Barca and Roman forces led by Lucius Aemilius Paullus and Gaius Terentius Varro. Both forces also included various allied soldiers. The battle, which ended in a major Roman defeat, is considered to be of great importance because of its tactical lessons for posterity, as well as the fact that it was the closest the Roman state had come to destruction in its history up to that point.

Of course, the Battle of Cannae did not spell the end of the Roman Republic; it not only survived the disaster, but ended up beating and eventually annexing the Carthaginians. Eventually, the Roman Republic became an empire whose cultural, political and legal legacy to the world is incalculable. But Rome might have never learned the lessons of toughness that made it so great had it not faced the existential crisis brought on by Hannibal’s invasion of Italy.

After the Roman Republic beat Carthage in the First Punic War (264-241 BCE), the Carthaginians looked for ways to strengthen themselves militarily and economically. As a result of the war, the Romans became the dominant naval power in the Mediterranean. One way in which this was achieved was the colonization of Iberia, then a mineral-rich region inhabited by various tribes. This effort was spearheaded by a Carthaginian general, Hamilcar Barca. Eventually, by 218 BCE, Hamilcar’s son Hannibal commanded Carthaginian forces in Iberia while using its resources to build up a significant force. That year, the Second Punic War began when Hannibal attacked the cited of Saguntum in Iberia, which had allied with the Romans despite being in the Carthaginian sphere of influence. Hannibal then took the initiative and invaded the Roman heartland of Italy through the Alps with about 38 thousand infantry, eight thousand cavalry and 37 elephants.

Once in Italy, Hannibal had the upper hand, and many tribes that had been conquered by the Romans either failed to assist the Romans or aided Hannibal. Direct confrontations between Roman and Carthaginian forces led to Roman defeats at Trebia (218) and Lake Trasimene (217), the latter of which is often described as the largest ambush in history. The Romans, by then desperate, appointed a dictator, Fabius Maximus, who adapted a non-confrontational strategy, avoiding open battles and engaging in guerilla warfare. However, as Hannibal marched to southern Italy, where he aimed to persuade many Greek and Italian allies of Rome to switch sides, hotter heads prevailed, and Paullus and Varro were elected Consuls. They raised an army of forty thousand Roman legionaries, forty thousand allied infantry, and 2,500 cavalry to confront Hannibal, who awaited them at Cannae.

From the start, even before the battle began, Hannibal demonstrated the strategic genius for which he is remembered for today. For example, he chose to camp his army in Cannae because it was a food magazine for the Romans, and was located in a region where Rome acquired much of its grain supply. These facts put much pressure on the Roman army. After the Romans arrived, Hannibal sent his cavalry to prevent the Romans from accessing water from the only river in the area, thus provoking a fight on his terms.

On the third day, Varro, who had decided to confront Hannibal’s forces, maneuvered him against the river so that Hannibal’s forces would be arranged in a thin line. Meanwhile, the Roman infantry was arranged in depth. The battle that followed was a classical example of a successful flanking maneuver. As the Roman infantry advanced forward, it became increasingly closely-packed and disorganized. Parts of the Carthaginian infantry swung up to the sides of the advancing Romans, attacking their flanks and further disturbing their organization. While this was occurring, the Carthaginian cavalry defeated the Roman cavalry on the edges of the battle and then attacked the Romans from the rear. Surrounded in a hot and packed space, the Romans were decisively defeated. The slaughter continued until the end of the day, when some survivors cut their way out and escaped. Varro survived, but his co-consul Paullus was killed. More soldiers died at Cannae than on the first day of the Battle of the Somme on the Western Front in 1916.

It is a testament to the great luck and tenacity of the Romans that they survived this battle. Although their allied city-states in southern Italy and Greece switched sides after Cannae, Hannibal lacked the strength and supplies to take Rome, which refused peace. A long, drawn out war resulted in a Roman army eventually attacking the Carthaginian homeland itself. Hannibal was recalled from Italy to Carthage, where he was defeated at the Battle of Zama in 202 BCE by one Scipio Africanus.

Cannae has had a lasting legacy. In the short term, it forced the Romans to develop a greater level of tactical flexibility for their infantry to prevent their army from getting flanked again. In the longer term, it has provided numerous lessons to military commanders throughout the ages. Cannae illustrates both the need for caution and the usefulness of avoiding battle if the situation so warrants it, as well as the desirability for a total battle of annihilation if that can be had. Many commanders throughout Western history have sought to replicate Cannae because of its total tactical decisiveness. As then General Dwight D. Eisenhower once said, “every ground commander seeks the battle of annihilation; so far as conditions permit, he tries to duplicate the classical example of Cannae.”

Akhilesh Pillalamarri is an international relations analyst, editor and writer, who contributes to the Diplomat and the National Interest. He received his Master of Arts in Security Studies from the Edmund A. Walsh School of Foreign Service at Georgetown University, where he concentrated in international security. You can follow him at his Twitter handle @akhipill. This article is being republished due to reader interest.