How a Bolt-Action Sniper Became Deadly For Syria 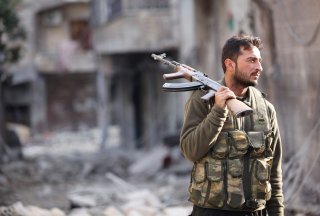 Here’s What You Need to Remember: Although outdated, the SSG 69 is still a popular pick.

The Steyr SSG 69 can be considered one of the first “modern” bolt action sniper rifles. In 1969, most purpose-built sniper rifles were either geared more for DMR-style battlefield sniping like the SVD or XM21, or modified infantry rifles like the ZfK-55, L42, or FR F1 (though the FR F1 as significantly modified from the MAS-series of rifles).

But the SSG 69 was built from the ground up to be a highly accurate rifle, utilizing the best in new materials technology at the time. While most sniper rifles of the time continued to use wood stocks, the SSG opted to use polymer to eliminate the accuracy effects of wood expanding and contracting with temperature. Spacers were also provided with the rifle to allow an individual user to adjust the length of pull to their exact liking. While at the time the polymer was state of the art, modern polymers have surpassed it in durability. The SSG’s polymer can be damaged by modern gun cleaning solvents.

Mechanically, the SSG 69 uses rear locking lugs. While rear locking lug rifles have a reputation of being less accurate, Steyr’s design does not suffer from this issue due to tight tolerancing in the receiver, being one of the first factory sniper rifles to be sub-MOA accurate. The bolt also features a reduced bolt opening throw of 60 degrees that aids rapid followup shots.

In order to keep the magazine profile flush with the bottom of the rifle, the SSG 69 uses an internal rotary magazine to feed rounds. A 10 round box magazine is also available for those that want capacity.

Steyr attempted to follow up on the SSG 69’s success with its later SSG 04 and SSG 08 rifles, eventually halting the production of the SSG 69 in 2015. However, the rifle remains incredibly popular with many organizations around the world. SSG 69s continue to see use with police worldwide, but recently the SSG 69 has seen extensive use in the Syrian Civil War. Both the Free Syrian Army and the Syrian Arab Army make use of the SSG 69, and the rifle itself is rather cheap on the black market, providing a significantly higher-end alternative to the sniperized Mosins often seen in the conflict.

That’s not to say the SSG 69 is without limitations. In the modern military sniper market, full-length picatinny rails for clip-on night vision sights, threaded muzzles, and increasingly adjustable stocks are becoming commonplace. In such a world, the SSG69 is positively outdated. But that doesn’t change the fact that it still is a sub-MOA 7.62x51mm rifle, a valuable commodity on any battlefield.