How Can U.S. Forces Defend Themselves From Drones? 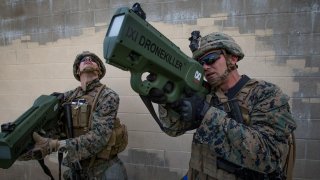 Here's What You Need To Remember: The key to fighting drones is detection, tracking, and neutralization.

The new counter-drone standard. The "system" that's being built by many companies to counter the drone threat.

As the drone threat has continued to evolve, the technology used to counter them has also matured. Early solutions which may seemed janky and offbeat (such as using birds) have given way to those rooted in existing military technology. One common setup appears to have evolved: which integrates modern radar, electro-optical sensing, and jamming technology in a complete anti-drone system.

Versions of this same concept are being created by different companies. But what are the limitations of this way of countering drones? How could it be upgraded to deal with future threats?

The detection is usually carried out by a modern AESA search radar system. These radars are usually mounted on various masts, with greater search efficiency the higher up they are. The radars themselves are usually not specialized for the role and can be commercial-off-the-shelf radars that were being used for ground search or light-air search before the drone threat really evolved.

The range at which these radars can detect drones is usually determined by the size of the drone. Official specifications for the Blighter A400 radars (which are used in the AUDS anti-drone system) give a detection range of 2.4 kilometers for small drones and 10 kilometers for larger systems.

This represents a pretty significant limitation of current anti-drone systems: the small nature of drones gives them a very small radar return, so for an effective detection “fence” against them, one must deploy detection stations relatively close together, compared to traditional air-defense radars.

Once a drone is detected, its position is usually relayed to a central control station. At that point, operators monitoring the airspace for drones can decide what action is to be taken. If a drone is determined to be a threat or if it needs to be identified, then the next phase comes into play: tracking.

Tracking is accomplished by a different sensor, an electro-optical sensor suite mounted on a mast and usually given 360 degrees of rotation. These can be co-located on the same mast as the radar or positioned separately.

The electro-optical sensor will either find the drone on its own via tracking algorithms or be cued onto the drone by a human operator and then “locked on.” At that point, automatic tracking ensures the drone is continually watched by the operators.

If a drone is determined to be hostile and needs to be neutralized, the next phase is activated. Coaxial to the electro-optical sensors, powerful jammers are mounted that can jam the radio signals headed to the drone. Depending on the software, the drone might attempt to return to the operator (the path of which can be tracked on radar), land, or simply fly out of control. The ability for the drone’s operator to control it is expected to be completely degraded by most jammer systems if they are used within effective range.

If the drone attempts to return to an operator, the system can yield valuable intelligence about who is operating drones in an area. Alternatively, if immediate neutralization of the drone is a priority, most systems have the ability to link into “kinetic” kill methods for drones, feeding the targeting and tracking data into air defense guns or missiles.

While this system represents a common way to use commercial-off-the-shelf technology to counter drones in a rapidly developed way that’s mature (Technology Readiness Level 9 for the AUDS system), there are significant limitations to what can be done by it.

The system lacks any electronic intelligence capabilities, so if a drone gets away it’s impossible to determine what kind of information it may have given an adversary before it was intercepted. The effect of a jammer is determined by the software on the drone that the system intercepts, which could result in unpredictable behavior such as a drone-borne IED dropping out of the sky over a friendly position when it was expected to make a soft landing.

The system with its narrow jamming cones has some capability to handle swarms by moving the jammer in a circular pattern, but this is not a robust capability. Using advanced radio transmitters such as those found in AESAs, which can shape the beam into distinct shapes, could aid with this.

Regardless, these systems represent the first evolution of a comprehensive solution to counter the drone threat in the modern age. Undoubtedly, better technologies and solutions will evolve in the future, but for now, systems like these are the best we have.