How the CIA's Secret Supersonic Plane Was Created 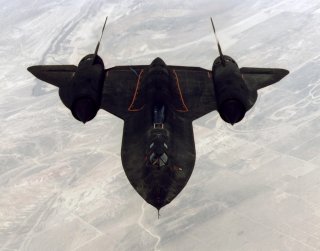 Here’s What You Need to Remember: Project Oxcart would end in 1968, but its successor in the SR-71 would fly for decades to come — and outrun at least 800 surface-to-air missiles, many fired from Soviet soil, along the way.

The SR-71 Blackbird remains the fastest operational military aircraft in history to this day, despite leaving service more than two decades ago, but its Lockheed predecessor in the A-12 was actually faster.

The A-12 that would ultimately lead to the missile-packing Mach 3 interceptor YF-12 and the missile-defeating legend that is the SR-71 first took to the skies in 1962 under the CIA’s banner in what was dubbed Project Oxcart. All three of these efforts were highly classified, not only because of the advanced technology Lockheed was developing, but also because–unbeknownst to Moscow–the United States was secretly sourcing materials to build these jets from within the Soviet Union,

In his book, “Archangel: CIA’s Supersonic A-12 Reconnaissance Aircraft,” official CIA historian David Robarge offers incredible insight into the Oxcart program, as well as what it took to be chosen to fly America’s highly classified, outrageously fast, and incredibly dangerous new platforms.

The A-12 wasn’t just another secret project for Kelly Johnson’s team at Lockheed’s legendary Skunk Works. The program was a massive undertaking in terms of both resources they expended and the results that were expected of them.

Johnson, the aeronautical engineer behind some of the most influential military aircraft designs of the 20th century, had already successfully fielded the high-flying U-2 spy plane for the CIA seven years prior. He’d designed the aircraft to fly right on the edge of space, soaring some 80,000 feet above the ground, using little more than his wits and trusty slide rule in less than a year.

Not only had Johnson’s success with the U-2 made him seem like the right choice for this new secretive and high-flying effort, but test flights of Johnson’s U-2 were also the reasoning behind establishing the now infamous Area 51 — a dry lake bed used as an isolated airstrip in Nevada known as Groom Lake.

While most high-speed aircraft use their afterburners to exceed the speed of sound in short bursts of just a few minutes at a time, the A-12 was meant to sustain those speeds for hours. That meant every inch of the aircraft had to be able to withstand the incredible heat produced by the air itself as it tore by at over 2,300 miles per hour, often raising external temperatures beyond 1,000 degrees Fahrenheit. Traditional materials used in aircraft construction like steel and aluminum just weren’t capable of withstanding that sort of punishment as reliably as needed.

There was a titanium alloy that was up for the job… but America’s titanium supply simply wasn’t enough. Instead, the CIA used third parties and shell companies to procure the titanium Project Oxcart needed from the world’s largest supplier at the time… the Soviet Union. With Moscow totally unaware, the U.S. bought the materials it needed to build jets that could defeat their most advanced surface-to-air missiles and fastest intercept fighters from within their own borders. Needless to say, when you’re buying the materials you need to fight your enemy from your enemy, secrecy is paramount.

So, when the time came to begin testing Johnson’s latest creation, the powerful new A-12, Groom Lake was once again the logical place to do so… they just needed to find some pilots who were up for the most secretive job in the Air Force.

Air Force officials teamed up with representatives from the CIA and Johnson himself to establish a set of criteria A-12 pilots would have to meet in order to even be considered for the job. Most of these qualifications seem rather ordinary, with physical requirements established by the practical limitations of cockpit space and an understandably strict requisite in terms of experience in high-performance jets. CIA historian David Robarge explained:

Pilots had to be currently qualified and proficient, with at least 2,000 total flight hours, 1,000 of them in the latest high-performance fighter jets; married, emotionally stable, and well motivated; between 25 and 40 years old; and under six feet tall and 175 pounds so they could fit in the A-12’s cramped cockpit.

The requirement that tends to stand out, of course, is marriage. According to legend, the Spartans who met the Persian army at the hot gates of Thermopylae were all required to have sons because the warriors knew they likely wouldn’t be coming back. The Air Force and CIA, on the other hand, were likely looking at being a “family man” in another way.

From our vantage point here in the 21st century, comfortably removed from the looming threat of nuclear war with the Soviet Union, the idea of worrying about defection seems almost comical. That was not the case during the days of Project Oxcart. In fact, as Johnson and his team prepared for the first test flight of the A-12 in 1962, at least a dozen American intelligence officials and service members had already turned on the United States since the end of World War II in favor of new homes in the Soviet Union, one of whom was an officer in the U.S. Air Force.

One of those service members, a U.S. Marine named Lee Harvey Oswald, defected in 1959, only to return the year of the A-12’s first test flight with his new Russian wife. A year later, he’d assassinate American president John F. Kennedy, though official reports suggest that killing and his defection were, for the most part, unrelated.

You’re apt to find both official and unofficial sources account for the marriage requirement as a measure of maturity, arguing that married men with families are more stable and level-headed. Even if that supposition doesn’t hold true in practice, the idea that it was a prevalent belief among Defense officials may indeed be true. After all, every potential pilot candidate for Oxcart was subjected to thorough psychological screenings, seemingly proving that mental health was indeed a priority. However, the marriage requirement was also very likely a bit of social insurance against putting a potential defector behind the stick of America’s most expensive and technologically advanced state secrets.

While no one would come right out and say defection was a concern, there’s no arguing that hiding this program from the Soviet Union and even the American public was an utmost priority.

“The process was kept so secret that the candidates’ superiors did not know what their subordinates were doing. Those who survived the screening were approached to work for the Agency on a highly classified project involving a very advanced aircraft. By November 1961, only five had agreed,” Robarge wrote.

It’s important to note that the pilots chosen for Project Oxcart, as well as many others involved, may have hailed from the Air Force, but ultimately answered to the CIA. Because the A-12 and SR-71 are so similar, you’ll sometimes see people claim the Air Force required their Blackbird pilots to be married. That wasn’t the case.

Ultimately only 11 men were chosen from the Air Force for the dangerous honor of flying the A-12. Two of them, Walter L. Ray and Jack W. Weeks, would lose their lives in crashes as a result. Project Oxcart would end in 1968, but its successor in the SR-71 would fly for decades to come — and outrun at least 800 surface-to-air missiles, many fired from Soviet soil, along the way.

This article first appeared at Sandboxx and is being reprinted due to reader interest.