How Congress Can Get Deterrence Right in the Asia-Pacific 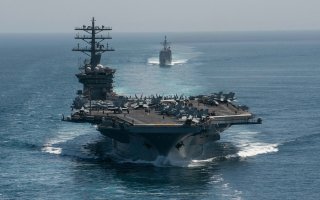 Amid legislative gridlock surrounding a new COVID-19 relief bill and the ongoing election season, one could be forgiven if they missed an important point of bipartisan agreement found in the House and Senate versions of the National Defense Authorization Act for 2021.  Both chambers have included funds for an “Indo-Pacific Reassurance Initiative” and “Pacific Deterrence Initiative,” each modeled after the European Defense Initiative adopted last year.  Although important distinctions between each piece of legislation exist, this consensus highlights the legislative support behind meeting U.S. military commanders' stated needs to adequately deter the threat posed by China.  It also underscores the importance of deterrence as an organizing principle for U.S. defense strategy.  This concept deserves further attention given its support throughout Capitol Hill and its associated implications on the utility of American military forces in the region.

The Department of Defense defines deterrence as the “prevention of action by the existence of a credible threat of unacceptable counteraction and/or belief that the cost of action outweighs the perceived benefits.” China’s deterrence strategy is strikingly different.  Beijing defines deterrence as “the display of military power or the threat of use of military power in order to compel an opponent to submit.”  Chinese military writing emphasizes that deterrence has two important functions: "one is to dissuade the opponent from doing something through deterrence, the other is to persuade the opponent what ought to be done through deterrence, and both demand the opponent submit to the deterrer's volition."  China's leadership pursues deterrence to dissuade rival challenges to its core interests and to compel other countries to abandon their national interests.  The U.S., by contrast, uses deterrence to dissuade aggressive action that will alter the status quo.

The distinction found between U.S. and Chinese deterrence practices raises two important policy considerations.  First, it highlights how China will challenge the international status quo and pursue revanchist claims in Taiwan and throughout the South China Sea.  While repeated Chinese belligerence and encroachment in the region have most notably resulted in international condemnation or raising tensions with the U.S., it would be naïve to think such behavior represents a failure of policy.  Beijing deters by compelling the target of its aggression to abandon offensive intentions or forcing states to conclude that the cost of resistance remains too high.  Chinese leadership subsequently views crisis as an avenue to achieve favorable political outcomes.  No amount of money appropriated for deterring China or an increase of U.S. forces in the region will likely change Beijing's approach.  America, therefore, must develop a deterrence strategy that mitigates the utility of such efforts and not on ensuring they never occur.

Second, U.S. defense leaders need to re-examine how U.S. conventional forces can deter China across the spectrum of military operations.  Much of the public's attention to this issue focuses on the anti-access/area-denial capabilities of Chinese forces and their associated challenges for U.S. military forces in a high-end conflict.  These concerns inform the Marine Corps' current force design overhaul and the navy’s evolving force realignment.  Beijing’s deterrent methods, however, encompass more than the coercion associated with high-end conflict.  China uses limited conventional aggression and irregular forces, which combine paramilitary and conventional units, to pursue its deterrent objectives in the region.  Examples of such behavior include efforts to establish air defense identification zones in the East and South China Seas, Chinese air encirclement drills around Taiwan, and ongoing artificial island construction in the South China Sea.  These and related acts of Chinese deterrent behavior pose serious questions for U.S. military planners because they neither meet the threshold necessary for a large scale American military response nor individually seem that threatening.  Yet, China relies on these tactics because they remain difficult to consistently deter, erode faith in the American security commitment to the region, and provide Beijing the ability to advance its interests without resorting to conflict.

Although no single piece of legislation will lead Beijing to abandon its malign behavior, this should not stop legislators from missing the bipartisan moment to help rethink and reshape a conventional deterrence posture in the region.  Congress' current efforts represent a commendable start, but it must do more.  Undoubtedly, future conversations will ensue that may lead many to question whether the current bipartisan "counter China" headwinds are sustainable.  If, however, this debate recognizes the differences found between U.S. and Chinese approaches to deterrence and the need to compete with Beijing's forces in scenarios short of war, then competing partisan strategies may advance this conversation in a meaningfully important manner.

Adam Taylor recently separated from the Marine Corps where he served as an aviation command and control officer.  He is currently pursuing his M.A. in international relations from American University’s School of International Service.  The opinions expressed here are his own and do not reflect any institutional position of the Marine Corps or Department of Defense.