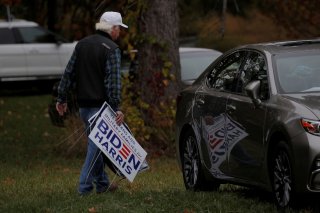 From both a public health and economic perspective, the coronavirus pandemic has wreaked havoc on our country. More than 210,000 people have died, more than 435,000 individuals have been hospitalized, and more than 10 million jobs have been lost nationally. The US economy was 10 percent smaller in June than it was last December and is not projected to fully recover until some point in 2021 at the earliest.

Despite these shocking numbers, there is substantial variation in people’s understanding of the significance of the pandemic. A recent Gallup Panel observed a major partisan gap in attitudes and behaviors related to COVID-19. Democrats are much more likely to approach COVID-19 with caution. Republicans tend to be less worried about getting the coronavirus and are more ready to return to normal activities.

One possible explanation for this variation is the difference in the severity of the pandemic and recession at the local level. Here, we review labor market data and COVID-19 data at the state level from February through September and find significant variation depending on states’ political leaning.

To help understand how states’ economic conditions may shape voters’ views, we examine labor market trends in red, blue, and swing states. Using data from FiveThirtyEight’s 2020 Election Forecast, we identify states based on which candidate is most likely to win the popular vote. Twenty red states are expected to go for President Donald Trump, and 23 blue states (including DC) are expected to go for former Vice President Joe Biden. We identify swing states as Arizona, Florida, Georgia, Iowa, North Carolina, Ohio, Pennsylvania, and Texas.

Cases per 100,000 residents in blue states exceeded red states by a factor of two or more through June, when case counts began to surge in the Sun Belt states. Hospitalization rates were threefold higher or more during that time.  However, the pandemic has been worsening more rapidly in red states in recent weeks. Figure 2 compares COVID-19 cases, hospitalizations, and deaths per 100,000 residents in red, blue, and swing states since March.

While swing states as a group tend to reflect the overall national trends in labor and COVID-19 data, there is significant state-by-state variation. For example, nonfarm employment in Pennsylvania dropped 8.4 percent, a larger impact than in 14 of the blue states. Similarly, some swing states, such as Florida, have experienced notably high COVID-19 case rates. Rates in Iowa are both high and have been rising quickly in the last few weeks.

A critical question is how these data may drive polling — and eventually election outcomes — in the United States. Ultimately, voters’ decisions will likely be more informed by what is going on locally than in the country broadly. If the state-level economic and COVID-19 data help explain the differing views on the pandemic between Democrats and Republicans, the rise in COVID-19 cases in the last few weeks in red states and some swing states represent another headwind for President Trump.