How the Coronavirus Is Making Chinese-American Rivalry Even Worse 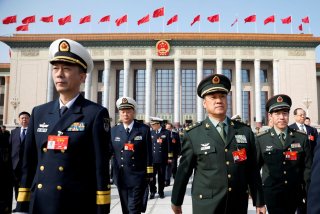 The COVID-19 pandemic has intensified awareness of U.S.-China strategic competition, and refocused international attention on the expression of Chinese power. In a reinvigorated battle for the rimlands, it will be increasingly difficult for countries to maintain a "neutral" balance between the two powers.

COVID-19's impact on global health and economics has heightened international attention toward China's security and economic strategies, altering the calculus of countries that once preferred balancing engagement between China and other bilateral and multilateral relationships. Now, countries from Western Europe to Australia, and even the Philippines, appear to be rethinking their assessment of China's capabilities and intent.

COVID-19 and the Chinese Response

The human impact of the pandemic in Europe and the United States appeared far more severe than the comparable official statistics from China, and given Beijing's history of manipulated numbers and information control, this raised questions about Chinese information sharing. This began shifting the global narrative from one focused on China's containment measures to one of China's hiding the truth. China may not have created the virus, nor intentionally spread it, but the bungling of information flows early on, and China's apparent strong-arming of the World Health Organization to downplay the significance of the initial outbreak, left many nations claiming they could have been better prepared if China had told the truth.

Whether this is an accurate assessment, a way to cover for domestic missteps or some combination of the two, perceptions of Chinese culpability were heightened over the supply of personal protective equipment. When COVID-19 began spreading rapidly in China early in the year, there was a rush on PPE supplies across the developed world to ship to China to help contain the virus and protect health workers. This strained supply lines when the virus began spreading beyond Chinese borders, and Chinese shipments of PPE and COVID-19 test kits to select countries were quickly labeled politically motivated. When faulty test kits and counterfeit PPE began arriving amid public health crises, ire against China swelled further no matter what Beijing may have intended. Western nations from the United Kingdom to Australia rallied behind calls for an investigation into the origins of COVID-19, something China saw as part of a propaganda campaign to assert the Chinese government was behind the virus.

As China came under increasing negative public and political opinion, it began an aggressive countercampaign, trying to highlight China's victory over the virus and its cooperation with international organizations. But Chinese diplomats also took a much harsher line toward anything they thought was critical of China, the so-called Wolf Warrior diplomacy, a name drawn from a nationalistic Chinese movie. Beijing even began using economic tools against critics, the most notable being threats against Australian barley and shutting down imports from four Australian meat processing facilities, unofficially in retaliation for Australia's calls for an investigation into the origins of COVID-19. These may be common elements of Chinese diplomacy, but amid the COVID-19 crisis, they have taken on more significance. Rather than change the views of world leaders, several countries have protested Chinese diplomat's threats of economic boycotts and sanctions, accusing China of bullying.

U.S.-China Strategic Competition in the Rimlands

Changing global perceptions of China will shift the context of the ongoing U.S.-China strategic competition. Many U.S. allies and partners have sought to straddle the U.S.-China divide given China's economic importance. Prior to the COVID-19 outbreak, the United Kingdom (along with much of Western Europe) bucked U.S. calls to ban Chinese tech giant Huawei, South Korea signed on as an early member of the China-led Asia Infrastructure Investment Bank, the Philippines announced its intent to terminate its Visiting Forces Agreement with the United States, and India has struggled to maintain its appearance of nonalignment while increasing defense ties with the United States. While countries will still seek to preserve some balance in relations, there is growing consensus that if left unchecked, China will force changes on the international system that will undermine their security.

It is in the Eurasian periphery where U.S.-China strategic competition will intensify; Nicholas Spykman's rimlands, the "amphibious" crescent stretching from Europe through the Middle East and South Asia to Southeast Asia and the Chinese coast. As China solidifies its connections to Russia and Central Asia through economic and military cooperation and the Belt and Road Initiative, it secures the Eurasian heartland and puts pressure on the rimland. For China, the rimlands are an outlet to the sea, areas of economic connectivity, and the buffer space to counter any U.S. attempt at a containment strategy.

The rimlands are the space where continental China and the maritime United States meet. As China is pushing outward through the rimland, the United States and its maritime partners Japan and Australia will accelerate their economic, political and military cooperation to press inward on the rimland. While the United States has recently pursued an independent path, it is likely over the next decade to reinvigorate a more cooperative strategy, or at least to encourage more action from partners outside and along the rimland.

Australia and Japan are already expanding their areas of operation and taking proactive steps to strengthen Southeast Asian states. In Europe, there are growing calls for reassessing Chinese investments at least to avoid letting Chinese firms bargain shop among COVID-damaged European corporations. Where the United States may find the fewest partners in countering China will be in the Middle East, where China is not perceived as a threat, and has even proved adept at straddling regional rivalries.

With awareness of China's rising power heightened amid the COVID-19 pandemic, and the United States forging ahead with bipartisan backing to counterbalance Chinese influence, the rimlands of Eurasia will once again find themselves caught between competing poles of power. While the extreme fragmentation of the globe into two Cold War-type blocs is unlikely, the ability of countries to profess neutrality will wane. China-U.S. competition is manifest not merely in bilateral terms, but in the shape of global norms and institutions, trade patterns and economic models — something will make a widening chasm increasingly difficult to bridge.

COVID-19 Heats up the U.S.-China Competition is republished with the permission of Stratfor Worldview, a geopolitical intelligence and advisory firm.