How the Coronavirus Pandemic Could Transform Military Sealift Command 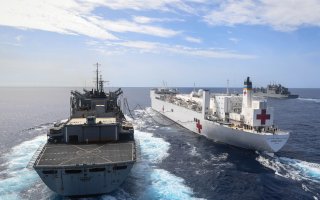 On July 29, 2020, the heads of three maritime unions – Marshall Ainley of the Marine Engineers’ Beneficial Association, Don Marcus from the International Organization of Masters, Mate & Pilots, and Michael Sacco, the long-time President of Seafarers International Union – jointly penned a letter to Rear Admiral Michael A. Wettlaufer, the Commander of the U.S. Navy’s Military Sealift Command. In their one-page letter, they were blunt and to the point: “We are writing to you today to communicate our ongoing and increasingly grave concerns regarding the mental health and well-being of MSC’s CIVMARS [civilian mariners].”

They highlighted three specific issue. First, the March 21, 2020 “Gangway Up” order that restricted merchant mariners to their ships due to the COVID-19 outbreak. While the act was prudent and ensured the readiness of the vessels to respond to missions, it was done with no warning and more importantly, did not apply to naval personnel assigned to the vessels or contractors. Therefore, the quarantine intended to be in place on board ship was broken daily, while crewmembers who reported on board for work that morning found themselves trapped and threatened with termination if they left the vessel, while others moved freely on and off the ship. This became apparent with a breakout on board USNS Leroy Grumman undergoing a yard availability in Boston.

The second issue involved the recent tragedy on board USNS Amelia Earhart. On July 22, third officer Jonathon J. Morris of San Mateo, CA fatally shot himself on board. The letter from the three union heads noted, “the ongoing and selective ‘Gangways Up’ restriction may have, in some part, contributed to the unnecessary and senseless act.”’ While there is no evidence to indicate this, my personal communications with crewmembers on board Amelia Earhart indicate that the event has not triggered any change in the operation of the vessel. While counselors were sent to the ship, its operations continue with no safety stand down, and not even a chaplain accompanied the vessel as it sailed to perform services for the fleet with some of the mariners not setting foot on ground for almost a half a year, except to remove the body of their shipmate. Mariners remained restricted to the ship in port, while active duty Navy personnel left the vessel.

The final issue is the delay in reliefs for crews, up to 90 days late in some cases. Many mariners have not been home since the COVID-19 outbreak hit the United States or were permitted ashore in that time period. MSC’s leave policy for its mariners is well outside the norms of common maritime industry practice because mariners hired directly by MSC must conform to government employment rules, even though they operate in an environment completely different than the normal federal employee. Mariners earn a set number of hours of leave every two weeks.  The only addition is 14 days of annual shore leave. For new employees to MSC, this means 10 months onboard ship (tours are usually limited to four months, but delays are typical) and only two on land in a year.

While shore-side government workers enjoy flex work schedules, weekends at home, get holidays off, enjoy the occasional snow day, and can schedule vacations well in advance, MSC mariners are toiling at least eight hours a day, seven days a week for a minimum of four months at a time when wages are comparable to those ashore. They miss weekends, holidays, birthdays, anniversaries, events with children, and now they face prolonged wait for relief. Unlike Navy sailors, MSC mariners do not rotate to shore billets or have many of the opportunities for education and training afforded to naval personnel. Even worse, those waiting to get out to ships have used all their leave and are now ashore, considered absent without leave, and not being paid as they await a call to report back to work for a potential assignment out to the fleet.

This is the situation facing 5,383 MSC mariners who crew 20 percent of the 301 ships in the U.S. Navy.  Let that number sink in for a moment: one out of every five ships in the battle force of the U.S. Navy is crewed by merchant mariners and not U.S. Navy sailors. All 29 of the auxiliary supply ships, the dozen fast transport ships, and the fleet tugs and salvage ships are all operated and commanded by merchant mariners. Some ships, such as the submarine tenders, command ships, and expeditionary support bases, while commanded by a naval officer, have merchant mariners who operate the deck, engine, and steward departments on board. This does not include the fleet of contract operated vessels in the afloat prepositioning force, sonar surveillance, ocean survey or sealift vessels with another 1,400 contract merchant mariners.

Inequality in the Merchant Marine

Throughout the U.S. Navy, specialized communities are commanded by one of their own – submariners command submarines, aviators command squadrons and carriers, SEALs command special operations, and so forth. Yet, when it comes to merchant mariners, they fall under the command of serving U.S. naval officers with little to no experience with merchant mariners.

Recently, MSC had two commanders – Mark Buzby and T. K. Shannon who graduated from merchant marine academies and were at least familiar with the U.S. merchant marine. The last two MSC commanders – Dee Mewbourne and Michael Wettlaufer – are both aviators. In the past, non-surface warfare commanders have done exceedingly well, particularly two submariners – Glynn Donaho and Lawson Ramage. They oversaw MSC’s forerunner – Military Sea Transportation Service (MSTS) – during the Vietnam era, when the service handled mainly passengers, cargo, and fuel and they were experts in disrupting those services due to their experience with sinking the Japanese merchant marine in the Second World War.

Today, MSC is integrated into the fleet structure and many of its previous sealift missions are shared with the Army’s Surface Deployment and Distribution Command and the United States Transportation Command. With the end of naval manning of auxiliaries in 2010, all of them are operated by MSC mariners, with some hybrid crews. No longer do MSC tankers and supply ships shuttle up to U.S. Navy auxiliaries attached to battle groups, but mariner-crewed oilers and combat supply ships are both shuttle and station ships for the U.S. Navy. Yet these ships lack two critical assets from their grey hull counterparts.

First, they have no means of defense at all. MSC ships, except for small arms, are completely unarmed. Ships that are intended to provide the fuel, ammunition, and vital supplies to keep an entire carrier strike group or Marine amphibious assault task force at sea lack even point-defense weapons. In the world wars, the U.S. Navy assigned armed guard detachments to merchant vessels to defend the ships. While Kaiser-class oilers have the mounts for close-in weapons systems (CIWS), they lack the weapons. If an enemy nation wanted to eliminate the threat of the U.S. Navy, why would it go head-to-head with a Nimitz-class carrier when all it could to do is wait, shadow, and sink unarmed supply ships and then wait for the task force to run out of gas?

Additionally, those mariners who now find themselves not dead or killed in the initial attack, but afloat in a life raft, face another challenge – what is their status? Not whether they are dead or alive, but are they considered veterans? They face on a common day the same challenges and threats as that of U.S. Navy sailors, but they are not considered veterans. Even those mariners that experienced the Second World War had to wait over 40 years, until 1988, to get their service acknowledged as veteran through a lawsuit.

Some argue that merchant mariners are contractors and therefore do not deserve this. But how many contractors command assets in the Unified Command Structure of the military? No contractor commands a squadron in the Air Force, or a battalion in the Army or Marines, yet one-fifth of the Navy’s ships have a merchant mariner in command. The Navy gets all the benefits of a sailor without giving the mariner those same benefits. That is a deal, but for the Navy.

Some say the easiest solution is to replace mariners on the 60-plus ships with U.S. Navy sailors, but it has been tried before. This unique arrangement came into being at the founding of the Navy. The first ships brought into the Navy were merchant ships along the dock in Philadelphia. The two founding fathers of the Navy – John Paul Jones and John Barry – learned their trade as master mariners. In the Revolutionary War and War of 1812, private men of war (privateers) vastly outnumbered public men of war. In the Civil War, mariners kept the Union army supplied along the coasts and rivers. At the end of the Spanish-American War, with a global empire, the Navy needed to prioritize its personnel and decided to hire a civilian crew to man USS Alexander, a collier. By 1917, almost all the Navy fuel ships were civilian manned by elements of the Naval Auxiliary Service. With the outbreak of war, and concerns of foreign elements in some of the crews, and a massive increase in the size of the Navy personnel, the crews of the NAS were militarized, and later the commercial passenger ships in the Transport Force. The Navy resisted civilian crewing, and in 1942 President Roosevelt placed the building, crewing, and operating of the commercial merchant marine in the hands of one person – Emory S. Land.