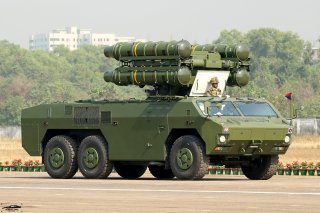 Here's What You Need To Remember: The FM-2000 looks very similar to Russia's Tor system, but, in fact, was based on a different Chinese system, the HQ-17.

The 2018 Zhuhai Airshow, held from November 6-11, was headlined by China’s latest demonstrations of its flagship J-10B and J-20 jet fighters. But throughout the show, the People’s Liberation Army (PLA) displayed scores of military gear ranging from self-propelled howitzers to all-terrain vehicles (ATVs). Analyzing the PLA’s extensive ground forces lineup at the 2018 Airshow gives us a better indication of where the Chinese military is focusing its development resources, and can even shed some insight into the PLA’s strategic priorities.

One such bellwether is the FM-2000, a short-range air defense system (SHORAD) unveiled at the Zhuhai Airshow. The FM-2000 is intended to support ground forces or defend infrastructure at a maximum effective range of up to 15 km and at altitudes of up to 1,000 miles.

The FM-2000 bears a host of technical similarities to Russia’s recent Tor M2K, a wheeled short-range surface-to-air system with approximately the same range as its Chinese counterpart. The full story, however, is more complicated than a straightforward case of borrowed design.

China did purchase Tor systems from Russia; namely, over a dozen of the original Tor-M1’s from 1996 to 2000. The PLA used the Tor-M1 as a foundation to develop its own HQ-17 short-range missile defense system, but with some meaningful technical improvements. These include a modernized suite of onboard electronics, an Identity Friend Foe (IFF) antenna integrated into a new radar system, and an upgraded communication system.

The FM-2000 is based not off the Tor-M2K, but of China’s HQ-17. In fact, the performance overlap between the two is so extensive that the FM-2000 appears as a negligible upgrade over its predecessor.

Their sole major difference lies in mobility: the continuous (i.e. caterpillar) tracks of Tor-M1 and its HQ-17 variant were plagued by a long lag time between stopping and shooting, a design shortcoming fixed with the introduction of the FM-2000’s wheeled chassis. The FM-2000 also features upgraded electronic countermeasures (ECM) in the form of counter-jamming capability against multiple targets.

These are relatively minor improvements, while the FM-2000’s combat performance has been left almost entirely untouched from its predecessor. What, then, is the FM-2000’s intended purpose if not as a technical successor to the HQ-17? It is likely the HQ-17’s export variant, much like what the medium-range FD-2000 defense system is to the HQ-9.

Whereas the HQ-17 is too expensive to be competitive on the global export market at a cost of $26 million per unit, a fresh production cycle gives CASIC engineers the chance to implement more affordable components while integrating mobility and ECM upgrades in a cost-effective way.

Turkey almost signed a contract for the FD-2000 system in 2013, with Ankara cancelling the deal at the eleventh hour due to US pressure. Pakistan is reportedly far along in negotiations to purchase 3 to 4 FD-2000’s, but the ink on the many fine details is far from dry.

With mixed success thus far, it remains to be seen if China’s surface-to-air export variants manage to carve out a slice of the global export market. The FM-2000 faces its stiffest competition from Russia’s similarly-performing Tor-2E, which is being advertised with the added benefit of interfacing with NATO air defense systems.