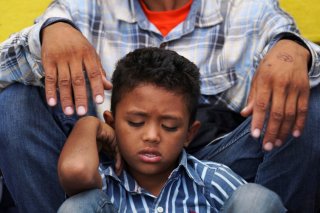 The death of a parent is one of the most traumatic events that can happen to a child. Sadly, during the pandemic losing a mother or father to the coronavirus has been a reality for too many.

But research shows that children can be resilient. Many will not have serious long-term problems following death.

Some, however, will face an increased risk of serious ongoing issues such as depression, prolonged grief and difficulties in interacting at school, with friends or in the family.

What makes the difference? Is it something deep and relatively unchangeable in the makeup of children such as their genes or basic personality traits? Or are there resources in their families or communities that help them do well despite their tragic loss?

I have spent the past 36 years trying to find answers to these questions. As part of a team of social scientists including Sharlene Wolchik and Jenn-Yun Tein at the REACH Institute at Arizona State University, I have been involved in research to identify strategies to improve the lives of bereaved children – we believe that what we have learned can help in this unprecedented time of loss.

When we started our work in 1984, the scientific literature provided only a few clues as to factors that make a difference and lead to healthy adaptation rather than long-term problems for children who lose a parent.

And there were no well controlled studies that demonstrated the effectiveness of intervention programs designed to improve outcomes for bereaved children over prolonged periods of time.

We decided to develop such a program by first identifying whatever evidence existed of factors that could make a difference from research with bereaved children or children who had experienced other traumatic events.

A 1984 Institute of Medicine report had suggested that one factor was the quality of parenting bereaved children received after the death.

Research with children involved in other traumatic experiences indicated that the way children coped with the stressful changes in their world made a difference in their well-being. These studies provided the clues on which we could build an intervention program promoting resilience of bereaved children.

In collaboration with counselors who were actively working with bereaved families, we developed the Family Bereavement Program – a 12-week program with separate groups for parents or caregivers, adolescents and children.

For example, we taught a simple activity we called “family time” in which families jointly decided on an enjoyable activity to do together for an hour or two every week – something inexpensive like going to the park for a picnic. We also taught children to recognize grief-related feelings and that they did not need to hide them.

Working with the parents gave us a deep sense of appreciation of their struggles. They were dealing with the chaos and pain of grief. On top of this, they needed to do the practical things to keep their family going, such as take care of their children’s needs, household finances and continue to work.

Yet, the parents took on the things we asked of them: practice listening to their children and establish positive routines.

To test the impact of our approach, in 1993 we conducted a randomized trial in which 156 bereaved families with 244 children and adolescents received either the Family Bereavement Program or the best books we could find on child and parent grief.

At the end of the program, we discovered that parents and caregivers were using the tools set out in the program and were showing more positive parenting. The children were using more effective coping strategies and were reporting lower distressing grief.

We were also encouraged to see that the effects of the program to strengthen positive parenting, which includes actively listening to their children and spending more quality time with them, seemed to lead to lower mental health problems such as depression, anxiety and acting out behaviors 11 months later.

But what we found most remarkable was the long-term benefits of the program. We interviewed the same children and parents six years later. Children who had been in the program had lower mental health problems. They reported lower feeling of grief and suicide-related thoughts, along with higher self-esteem.

We re-interviewed the children again in 2011 and 2012 after a further nine years had passed – some 15 years after the program. We found that being in the program was associated with a decrease in their depression, use of mental health services and psychiatric medication.

On the front lines

Some 36 years after I started work in this field, many other researchers have added important insights, such as Julie Kaplow, David Brent and Nadine Melhem.

But we still have a lot to learn about the many factors that lead to resilience for bereaved children. Research is a slow process. But one truth of which I am sure from observing parents in the program as well as from looking at the results from our research is that parents and caregivers are heroes for their bereaved children. I saw it back when my research started, and I believe it is even more true now that parents need to deal with added challenges brought on by the pandemic.

I know from my experience that many parents coping with bereavement don’t see it that way. They often see themselves as simply doing the everyday work of helping their children to survive when the world is collapsing around them. For me that’s pretty heroic. And in this time of COVID-19, I would add parents of bereaved children to the list of heroes that need to be recognized and supported.