How Did Russia’s T-90 Tanks Fare in Syria? Not Well 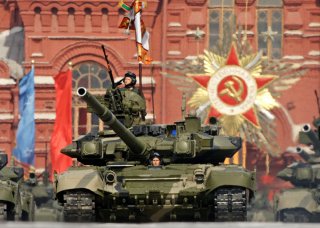 Here’s What You Need to Remember: Russia is reportedly planning to upgrade its T-90As—which are currently less advanced than the T-90MS’s in service with the Indian Army—to a T-90M variant with new hard-kill active protection systems, upgraded reactive armor, and a more powerful 2A82 main gun. Ultimately, the losses in Syria show that any tank—whether T-90, M-1 or Leopard 2—is vulnerable on a battlefield in which long-range ATGMs have proliferated.

In a word, no—but you would only know that if you followed the many less well publicized videos depicting the destruction or capture of T-90s by rebel and government forces.

Jakub Janovský has dedicated himself to documenting and preserving recorded armor losses in the Syrian Civil War for several years, and recently released a vast archive of over 143 gigabytes of combat footage from the conflict ranging from atrocities perpetrated by various groups to hundreds of ATGM attacks.

Another T-90A was either hit by a Russian-built Konkurs (similar to the TOW) or the more powerful laser-guided AT-14 Kornet missile near Khanassar, Syria, wounding the gunner. The crew eventually abandoned the vehicle as a fire spread from the machine gun mount into the vehicle, where it began to cook off the 125-millimeter shells on the carousel-style autoloader. The placement of ammunition in middle of the tank alongside the crew, rather than a separate stowage compartment as in the M1, has long been a vulnerability of Russian tank designs.

Rebels, meanwhile, maintained two T-90s in an abandoned brick factory in Idlib province. In April 2017, of the rebel T-90As, reinforced with sandbags on its armor, apparently went on a rampage assisting rebel forces in recapturing the town of Maarden, according to Russian media. Later, one of the T-90As was recaptured by the government, and the other was knocked out—reportedly, by a T-72 tank using a kinetic sabot round in the side armor.

In October, ISIS captured a 4th Armored Division T-90A near al-Mayadeen in eastern Syria when it ventured alone into a sand storm. Then on November 16, 2017, ISIS ambushed a Tiger Force armored column and apparently blasted a T-90A’s turret clean off its hull and left to rot upside down in the desert. The crew was reportedly killed. However, pro-Assad media claims this was the T-90 captured earlier by ISIS, found to be inoperable, and then destroyed for propaganda purposes.

Janovský says he is not aware of T-90s being lost to shorter-range weapons, “since the regime rarely used T-90s in close combat, especially after two were captured.” The T-90 has in fact been “relatively successful” in Janovský’s opinion, despite losses due to “overconfidence and poor coordination with infantry, which has been a long term problem of the SAA.”

According to Janovský, the T-90’s most useful feature has actually proven to be its superior optics and fire control computer compared to earlier Russian tanks. “T-90s performed well when they had an opportunity to shoot at rebels from long distance or at night, when modern optics and fire-control computer proved to be a major advantage.” Indeed, the T-90A model began receiving French-built Catherine FC thermal imagers in the mid-2000s.