How Did This South American Battleship End Up in the Royal Navy? 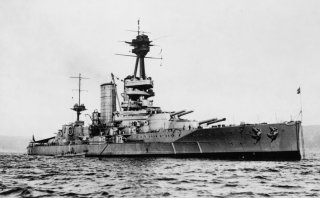 Here's What You Need to Know: This Chilean battleship lived a long and interesting life.

In 1910, Chile bought a battleship. Fifty years later, Chester Nimitz ensured that parts of that ship would complete the restoration of the Japanese battleship Mikasa, Togo’s flagship at the Battle of Tsushima. Along the way, the Chilean battleship would serve in the British Grand Fleet, get bombed by its own air force during a mutiny, and almost get sold to the United States.

Chile was the final entrant into the Southern Cone battleship race. Although smaller than either Argentina or Brazil, Chile had maintained a respectable fleet and a strong martial tradition in the nineteenth century. When the other two ordered battleships, Chile felt compelled to follow suit, as much for reasons of prestige than security. Chile ordered Almirante Latorre and Almirante Cochrane from Armstrong-Whitworth in 1911. Named after Admiral Juan Jose Latorre, a hero of the War of the Pacific, Almirante Latorre was a well-armed, well-designed ship. She carried ten 14” guns in five twin turrets, beating out the 13.5” guns carried by the latest British super-dreadnoughts. She displaced twenty-five thousand tons and could make twenty-two knots. Her armament compared favorably with most foreign competitors, and (eventually) made Latorre the most powerful warship in South America.  She could also outpace the battleships of Chile’s neighbors

Unfortunately for Chile, World War I intervened, and both Latorre and her sister were purchased by the Royal Navy. Almirante Latorre was completed in 1915 as HMS Canada and joined the Fourth Battle Squadron of the Grand Fleet. She participated in the Battle of Jutland, firing forty-two rounds from her main armament and helping to destroy the German cruiser Wiesbaden. Following the war, Canada was refit, renamed Almirante Latorre, and sold back to Chile. The Chileans decided not to re-purchase Almirante Cochrane, which was renamed Eagle, converted into an aircraft carrier, and eventually sunk by a U-boat.

Almirante Latorre served as the flagship of the Chilean Navy for most of the rest of her long career. In contrast to her Brazilian and Argentinean counterparts, she was kept in good condition up until an engine room fire in 1951. In the 1920s she was used extensively, supporting disaster relief operations after an earthquake, and serving as host to a visit from the Prince of Wales. In 1929 she underwent extensive modernization in the United Kingdom, updating her engines, fire control, and anti-aircraft armament.

In 1931, in protest of a pay cut, the crew mutinied. The Great Depression struck Latin America hard, leaving the Chilean government with minimal resources for maintaining the fleet. The mutiny was launched from below decks, with enlisted personnel leading the charge. The rebellion spread quickly from Almirante Latorre to the other ships in the fleet and radicalized over the course of several days. A second flotilla joined the rebellion, as did groups of sailors ashore. For a while, the Chilean government feared that the rebellion would become a general revolutionary revolt. Chile’s leadership requested the transfer of bombs from the United States that could penetrate Latorre’s armored deck, as well as submarines that could defeat the rebel squadron. Chilean Air Force planes, attempting to put down the mutiny, scored a near miss on the battleship, but failed to do any serious damage.  However, a combination of internal division and government repression ended the rebellion with relatively little bloodshed. A victim of austerity, the battleship entered reserve in 1933.

Following the Pearl Harbor attack of December 7, 1941, the United States Navy offered to purchase Almirante Latorre. The Chileans declined, and the US did not push the issue as the USN did not really suffer from a shortage of old, slow battleships. Three of the eight battleships at Pearl Harbor were returned to service in short order. In fact, the USN withdrew the Tennessee, only lightly damaged at Pearl Harbor, from service for an extensive two-year refit. West Virginia and California also underwent much longer than necessary refits. The USN made no effort to bring Wyoming, demilitarized under the terms of the 1930 London Treaty, back to active service, although this probably would have been cheaper and quicker than buying the Chilean ship. Almirante Latorre would have been roughly equivalent to the USS New York, which served most of the war in shore bombardment and convoy escort duty. In any case, the Chileans declined to sell their flagship to the United States.

With the scrapping of most of the older battleships in the Royal Navy shortly after World War II, Almirante Latorre became the last active capital ship to have served at the Battle of Jutland. After the engine fire in 1951, Almirante Latorre spent its last few years inactive. In 1958, she was sold to a Japanese company for scrapping. In 1959, retired Fleet Admiral Chester Nimitz was supporting a project to refurbish the Japanese battleship Mikasa, the last survivor of the Battle of Tsushima. Mikasa had suffered some damage in World War II and had generally been neglected since the end of the war. Nimitz provided financial and administrative support for the restoration of Mikasa to her original state. Almirante Latorre, being a rough contemporary of Mikasa, was cannibalized in the service of this restoration. Thus, parts of the last survivor of Jutland were used to restore the last survivor of Tsushima.

Robert Farley is a senior lecturer at the Patterson School of Diplomacy and International Commerce. His work includes military doctrine, national security, and maritime affairs.