How Does Alaska Factor Into America's Geopolitical Strategy? 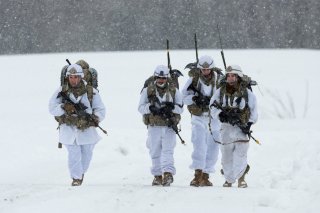 Here's What You Need to Remember: NATO strategy is a horizontal affair for the most part. European allies look eastward toward Russia, and the North American contingent looks across the Atlantic Ocean toward Europe and thence toward Russia. A warming climate promises to superimpose a vertical axis on NATO deliberations, compelling allies that front on the Arctic to work together to protect their interests in northern reaches. For Alaskan leaders that means working with national, state, and provincial leaders in the United States and Canada on matters relating to maritime strategy.

Alaska is much in the news during this incipient age of great-power strategic competition. Almost daily, it seems, U.S. Air Force fighter jets scramble to intercept lumbering Russian bombers approaching North American airspace to the extreme northwest. This spring the air force activated its first squadron of F-35 joint strike fighters in the Pacific, emplacing the stealth warbirds at Eielson Air Force Base in Alaska. Around the same time, a B-1B Lancer bomber took wing in South Dakota, swept over the Bering Sea, and skirted along Russia’s Kamchatka Peninsula in the course of an ultra-long-range flight to Japanese airspace. And on and on. We dwell in eventful times.

Air commanders portray their endeavors as part of the Pentagon’s “dynamic force employment” model, whereby forces remain close to home for the most part yet sortie to faraway theaters at odd and unpredictable intervals. Dynamic force employment is meant to show would-be antagonists that the U.S. military can deliver heavy combat power on battlegrounds far from home. In the process, it puts them on notice that America is not abandoning distant theaters. But while airpower has dominated headlines of late, peacetime strategic competition unfolds in many domains. Information, cyberspace, and economics are competitive if vaguely defined arenas for competition. Military forces interact aloft, on the ground, and on and beneath the sea’s surface.

Strategic competition is like an armed conversation about relative power and weakness. Each competitor tries to posture itself as stronger for strategic effect, hoping to persuade others it would win a battle should one transpire. Force design and movements equate to statements and rebuttals in an argument. Or, since sports are—thankfully—coming to life again after the pandemic, strategic competition resembles trash talk. When spoiling for a bout each pugilist tries to impress both the opponent and important observers with its fighting prowess. A successful contender gets in the opponent’s head, overawing hostile leaders and amassing a psychological advantage.

A fearsome-seeming contestant, then, convinces others it would outmuscle its opponent should some dispute degenerated into armed conflict. In so doing it rallies allies and partners to its cause. After all, it’s human nature—not to mention common sense—to pool your fortunes with a likely winner rather than share the wages of defeat with a likely loser. Alaska occupies prime real estate at the interface between the Pacific and the Arctic. The state and its environs seem poised to become a forum for great-power trash talk carried on chiefly through the medium of displays of air and sea power. That being the case, studying this emerging theater is a must.

Nicholas Spykman, the dean of geopolitics scholars, points out that a geopolitical region is not precisely the same as a geographic region. Geography is fixed for the most part, while geopolitics metamorphoses over time as contenders rise, plateau, fall, and sometimes rise again. The Arctic theater is unique in that both the physical and political settings are in flux at the same time. In fact, the region will be a shapeshifter in a geophysical sense. Some years back the U.S. Navy’s chief oceanographer forecast that warming temperatures will open new sea routes to navigation for a few weeks each year before they ice over again as winter approaches and the icepack forms anew. The Northern Sea Route, which undulates along the Russian seacoast, should be navigable for six weeks or thereabouts each year by 2025 according to navy estimates. The fabled Northwest Passage, which skirts the northern Canadian and Alaskan coasts, will open intermittently. Most strikingly, a new Trans-Polar Route may permit shipping to transit more or less directly over the North Pole for a couple of weeks per annum.

This newfound freedom of movement is replete with economic and military portents. The economics of warmer temperatures seem straightforward. Cruising through Arctic waters cuts some 40 percent off a voyage between East Asia and Western Europe, depending on the points of origin and destination. Shorter journeys save fuel, reduce wear-and-tear on hulls and equipment, and alleviate fatigue to ship crews. Slashing shipping costs is a boon to everyone throughout the supply chain, from manufacturers to shippers to buyers. The martial dimension seems likewise clear, especially as it applies to Russia. The Russian Navy will be thankful if it can shift forces from side to side over the pole, even for a few weeks each year. Climate change will spare commanders from sending warships on long, roundabout, potentially contested voyages through the Atlantic Ocean, Indian Ocean, and Pacific Ocean (or vice versa) when they want to bulk up one of the navy’s fleets. From the Russian vantage point, then, this represents world-historical change for the better. Small wonder Moscow has made haste to exploit the new normal.

Warming, then, augurs a lively geopolitical neighborhood for Alaskans. First of all, Alaska faces Siberia across the Bering Strait, the western entryway from the Pacific Ocean to the Arctic Ocean. There are many access points to the Arctic from the Atlantic Ocean to the east. The Bering Strait constitutes the lone access to polar climes from the west, and thus commands surpassing importance for seafarers. There is no substitute passage that merchant or naval fleets could take to bypass it. The strait is unusual among narrow seaways, moreover, because a great power controls each shore. The Panama Canal, Suez Canal, Strait of Gibraltar, and Malacca Strait, to name a few waterways of similar moment, are free of immediate great-power antagonism.

Nor is Alaskan geopolitics entirely about Arctic navigation, important though the polar ocean may be. Geopolitics scribes (yours truly included) typically describe Asia’s “first island chain” as extending from northern Japan through Taiwan, the Philippines, and the Indonesian archipelago. This reflects our southerly bias toward East and Southeast Asian affairs, not to mention the far north’s—heretofore—mostly inert character as a geopolitical region.

In reality the Aleutian Islands—Alaskan property—comprise the island chain’s far northeasterly arc, reaching out from mainland North America toward the Kamchatka Peninsula. The Aleutians chain overshadows sea lanes leading to the Bering Strait from the south, granting U.S. forces emplaced there influence over traffic bound to or from the polar expanse. In short, the Aleutians seem primed to resume the geopolitical importance the Imperial Japanese Navy awarded them during World War II. Admiral Isoroku Yamamoto, the Japanese naval commander-in-chief, designated the island group as the Japanese left flank for the Battle of Midway far to the south. To safeguard that flank Yamamoto ordered the fleet to occupy Attu and Kiska, at the group’s western terminus.

Second, just as Siberia and Alaska glare at each other across the Bering Strait, Russia (or perhaps a Russo-Chinese entente) and NATO will increasingly glare at each other across the Arctic Ocean as a whole. A bipolar configuration of power is unusual in semi-enclosed seas in history. In the Mediterranean Sea, multiple great powers have generally jostled for primacy. A few historical epochs—the Peloponnesian War between Athens and Sparta in the Aegean Sea, the Punic Wars between Rome and Carthage, the sixteenth-century contest between the Ottoman Empire and the West—stand out as exceptions to the rule. One local hegemon, the United States, fronts on the Caribbean Sea and Gulf of Mexico, outweighing its neighbors by far. Another hegemon, China, fronts on the South China Sea. Juxtaposing Arctic and Alaskan geopolitics against history and marine geography could offer a glimpse of what the future holds for the region and how to manage that future.

So how should Alaskan and national leaders prepare for the brave new world taking shape to the north? They could do worse than getting back to basics, consulting the masterworks of strategy. Two insights from the canon. One, as Alfred Thayer Mahan observes, three primal elements constitute sea power. Commerce is the prime mover driving any society to the sea, and it generates revenue for worthwhile pursuits—pursuits such as constructing a navy to defend seaborne commerce. Mercantile and naval fleets transport goods and military power across the oceans. And fleets need harbors, both at home and at their destinations, to load and unload cargo and to obtain logistical support. A seafaring society cannot do without any link in the Mahanian “chain of Sea Power.” The stouter each link, the better. Political and military leaders must cast a heavy-duty chain and keep it from corroding through neglect.

And two, J. C. Wylie, a successor of Mahan at the Naval War College, teaches that the supreme goal of military strategy is to station a “man on the scene with a gun.” By that, he means that superior firepower is the arbiter of control over somewhere or something. He considers the soldier the final determinant of victory. People live on land, and therefore wars are won on land. Naval and air forces are enablers for ground forces. But Wylie, a naval officer, would have been comfortable with teleporting his metaphorical man on the scene with a gun out to sea. If an armed force wants to control some embattled sea or air space, it likewise needs to amass enough firepower in that space to outgun its foes. Substituting a sailor or aviator toting a gun (or missile) into Wylie’s formula yields guidance for Arctic strategy. Arming for defense is essential.