How Does Russia's T-14 Armata Tank Stack Up to the Abrams? 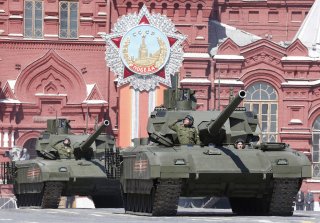 Here's What You Need To Remember: The T-14 is a quantum leap up from the previous Soviet-Russian tank design. For the first time, crew survivability appears to be the utmost objective, and several dramatic improvements make this clear. However, the tank still has significant drawbacks.