How the Far Left's Focus on Identity Politics Is Changing America 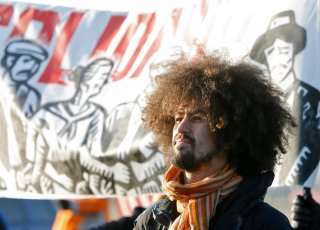 America always has been a dynamic country of constant change, with its people looking ahead.

But an elite-driven ethos, which has become the dominant ideology of the country’s most powerful institutions, threatens to overwhelm the ideas and traits that made America what it is.

In his new book “The Plot to Change America: How Identity Politics is Dividing the Land of the Free,” my colleague, Mike Gonzalez, explains how reason, objectivity, and traditional patriotism are being undermined by left-wing ideology and ascendant group identity.

In the past decade, we’ve seen a remarkable upsurge in “wokeness,” and it’s no longer confined to radical corners of college campuses.

James Lindsay, co-author of a forthcoming book, “Cynical Theories: How Activist Scholarship Made Everything About Race, Gender, and Identity—and Why This Harms Everybody,” succinctly explained what “wokeness” means at a recent Heritage Foundation panel discussion:

Wokeness is a fusion of the critical theory school of neo-Marxism, which is a form of identity politics, and radical activism that has a very particular worldview that separates the world into liberationists versus oppressors, or oppressed versus oppressors.

The glue and fuel of this radical change, as Gonzalez explains in his new book, is identity politics.

Identity politics is now everywhere. It’s embraced by Antifa and Black Lives Matter, as well as by corporate America, the media, and, of course, academia.

Gonzalez breaks down how the left adopted a radical form of identity politics, which is fulfilling its goal of radically transforming American society. Importantly, he explains that this was not a grassroots movement, but one precipitated by an elite intellectual vanguard. He writes:

The fact is that, from the beginning, it has been—and continues to be—an elite project. For too long, we have accepted the fairy tale that America grew organically into the nation gripped by victimhood and identitarian division that it is today, that it is all the result of legitimate demands by minorities for recognition or restitution for past wrongs.

This intellectual project has roots in Marxism, but more specifically, in a series of thinkers in the early and mid-20th century.

Antonio Gramsci, an Italian Marxist thinker, theorized in the 1920s that communism had not really taken root in the West because the working classes had not been conditioned for it. He made the case for a kind of cultural Marxism that would ultimately transform Western societies.

Gonzalez explains how Gramsci’s ideas were absorbed by the German-based Frankfurt School of Critical Theory, and by its leading proponent in America, Herbert Marcuse. Marcuse, who came to the United States in the 1930s, became a leading figure of the New Left and was an advocate of the radical college campus politics of the 1960s and 1970s.

Part of the strategy of Marcuse and left-wing activists was to mobilize various racial groups who would oppose prevailing Western and capitalist values.

These groups, Gonzalez writes, often were created artificially, fusing disparate ethnic groups of people into larger pan-ethnic identities. He breaks down those efforts in several chapters, explaining how Hispanic, Asian-American, and, most recently, Middle East and North African identities have been created to collectivize often radically disparate people into organized pressure groups of the aggrieved.

It’s important to note that the purpose of forging these groups is not actually to end racism as it has been traditionally defined or ensure equal rights under the law, but to promote “equity.”

Identity politics does not just extend to ethnic or racial groups, but sex and gender categories as well, all united in opposition to a common oppressor group: straight, white males.

To a large extent, that’s what distinguishes the identity politics of today from the ethnic group and machine politics of earlier times. Certain identities are ascribed levels of moral value based on where they fit on the hierarchy of oppression.

So, where does this all lead? Gonzalez writes:

Venezuela and other parts of Latin America are the messes they are today not just because of Marxian socialism, but because Gramsci refined Marxism and created ideological vectors through which entire societies could be clandestinely infected with Marxist pathologies.

America will head down a similar dysfunctional path if the identitarian ethos continues to hold sway. It bodes ill for American unity and constitutional government.

Identity politics, by its very nature, is concerned with the interests of specific, designated groups, and not with the larger polity. But constitutional republicanism can exist only through the active participation of a united people working within the confines of the nation-state, debating among themselves, but coming together to agree on principles.

It’s clear that if the identity politics of today continues to replace the concept of “e pluribus unum,” America will cease to be one nation under God and become endless warring “nations” divided and clawing away at the fabric of a hopelessly fractured and increasingly hateful society.

That in essence is the dire warning of “The Plot to Change America,” a process happening literally before our eyes during our summer of protests and riots.

Gonzalez lays out a path forward if we are to have any hope of stemming the tide of identity politics.

First, there must be a revival of civics and the inculcation of informed patriotism in young Americans in our homes and schools.

“Americans must wage a crusade for classrooms to teach the content that will help children grow into confident, knowledgeable adults,” Gonzalez wrties. “The conundrum is that we have to fight for shared national knowledge, for a sense of civics that unites us from coast to coast, in 13,600 school districts across fifty states, without advocating for a national curriculum or relying on the federal government.”

That would rely in part on battling back against the disinformation of radical historians such as Howard Zinn and efforts such as The New York Times’ 1619 Project, already being used by school districts around the country, which portrays America as a hopelessly racist society founded on slavery.

Americans also can take action against the intentional, top-down enforcement of the re-tribalization of America.

If Americans are to work toward “elimination of categories, the culture of victimhood and expectations of benefits, the grievance mongering, the public must become aware of what has happened and get involved,” Gonzalez writes, adding:

Our political leaders at the federal, state, and local levels simply won’t get there by themselves. It is not that they lack the courage, but that the incentives are not there at the moment for them to do the right thing.

This article by Jarrett Stepman first appeared in the Daily Signal in 2020.