How Fast Can the Senate Move on a Supreme Court Nominee? 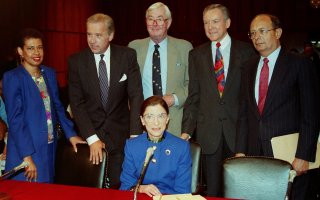 The Supreme Court vacancy created by the death of Justice Ruth Bader Ginsburg focuses attention on an obscure—but very important—process within our system of government; namely, how does such a job opening get filled?

First, there’s no manual, rulebook, or set of instructions. The Constitution, in fact, has very little to say about it.

It gives the power to make nominations to the president and the power of “advice and consent” to the Senate. And the Constitution allows the Senate to determine its own rules for doing business.

That’s the extent of it. The Constitution doesn’t tell either the president or the Senate how to fulfill their responsibilities when it comes to appointing judges.

Second, every vacancy and every nomination is unique. Justices sometimes announce months in advance that they will step aside on a specific date. Others say they won’t leave until their successor is finally confirmed.

Vacancies can occur suddenly, as with the unexpected death of Justice Antonin Scalia in 2016, or after a long decline in a justice’s health.

Similarly, presidents can make a nomination quickly or take a long while to think about it. President George H.W. Bush announced his nomination of Clarence Thomas in 1991 only a few days after Justice Thurgood Marshall announced his retirement. By contrast, President Bill Clinton took more than three months to nominate Ginsburg to replace Justice Byron White in 1993.

Third, the length and complexity of the Senate’s confirmation process also vary considerably. The Judiciary Committee, for example, held its first hearing on a Supreme Court nomination in 1916, but confirmed at least a dozen nominees after that without a hearing at all.

The committee held a hearing on eight Supreme Court nominees who did not attend, including Earl Warren in 1953. Justices Stanley Reed (1938) and William O. Douglas (1939) attended their hearings, but said nothing and were asked no questions. While Reed’s hearing lasted almost an hour, Douglas’ was over in just five minutes.

The entire confirmation process is sometimes over before virtually anyone knows it has begun. The Senate confirmed James Byrnes in 1941 on the same day that President Franklin Roosevelt nominated him. Four years later, Roosevelt’s nomination of Harold Burton languished longer (for a single day).

In 1962, the Senate confirmed White without even a recorded vote, only a few hours after the Judiciary Committee held a very brief hearing.

The confirmation process has taken longer in recent decades, in part because it has become more formal and complicated. Vetting by the Justice Department, background checks by the FBI, and evaluations by the American Bar Association, for example, all add to the timetable.

Ginsburg was confirmed in 1993 just six weeks after her nomination.

While the Senate would unanimously confirm Antonin Scalia in 1986, the confirmation process took 89 days because Scalia was paired with William Rehnquist, the justice that Scalia would replace and who had been nominated to be elevated to chief justice.

Rehnquist attracted significant controversy, and the 65-33 Senate tally was, as a percentage of Senate votes cast, the most opposition since Justice Mahlon Pitney was confirmed in 1912.

These are more than just interesting anecdotes. They demonstrate that there is no single way to appoint a Supreme Court justice. The Constitution does not say how to do it, and even Senate rules do not establish a specific framework.

The circumstances surrounding a vacancy, the politics of the time, the existing philosophical balance of the Supreme Court, and many more variables add up to the Senate handling Supreme Court nominations in at least a dozen different ways.

Supporters or opponents of a particular president, or of a particular nominee, often argue that the confirmation process must mirror the process for this or that prior nominee. Those “precedents” might be interesting, and perhaps even relevant, but they certainly are not binding.

In each case, the Senate must decide how best to handle a nomination when the president actually sends that nomination to the Senate.

Thomas Jipping is deputy director of the Edwin Meese III Center for Legal and Judicial Studies and senior legal fellow at The Heritage Foundation.