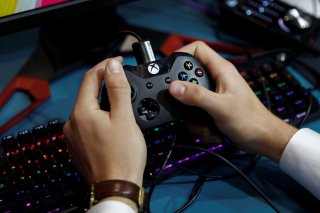 Young people have probably spent much more of their time than usual playing video games over the last few months thanks to the coronvirus pandemic. One report from telecoms firm Verizon said online gaming use went up 75% in the first week of lockdown in the US.

What impact might this have on young people’s development? One area that people are often concerned about is the effect of video games, particularly violent ones, on moral reasoning. My colleagues and I recently published research that suggested games have no significant effect on the moral development of university-age students but can affect younger adolescents. This supports the use of an age-rating system for video game purchases.

Our sense of morality and the way we make moral decisions – our moral reasoning – develop as we grow up and become more aware of life in wider society. For example, our thoughts about right and wrong are initially based on what we think the punishments and/or rewards could be. This then develops into a greater understanding of the role of social factors and circumstances in moral decisions.

There is a long-standing debate around the effects of video games on moral development, particularly in young people, which typically focuses on whether violent content causes aggressive or violent behaviour.

Yet the moral dimension of video games is far more complex than just their representation of violence, as they often require players to make a range of moral choices. For example, players from the game BioShock have to choose whether to kill or rescue a little girl character known as a little sister.

A player with more mature moral reasoning may consider the wider social implications and consequences of this choice rather than just the punishment or rewards meted out by the game. For example, they may consider their own conscience and that they could feel bad about choosing to kill the little girl.

We surveyed a group of 166 secondary school students aged 11-18 and a group of 135 university students aged 17-27 to assess their gaming habits and the development of their moral reasoning using what’s known as the sociomoral reflection measure . This involved asking participants 11 questions on topics such as the importance of keeping promises, telling the truth, obeying the law and preserving life. The results suggested a stark difference between the two groups.

Among secondary students, we found evidence that playing video games could have an affect on moral development. Whereas female adolescents usually have more developed moral reasoning, in this case we found that males, who were more likely to play video games for longer, actually had higher levels of reasoning. We also found those who played a greater variety of genres of video games also had more developed reasoning.

This suggests that playing video games could actually support moral development. But other factors, including feeling less engaged with and immersed in a game, playing games with more mature content, and specifically playing the games Call of Duty and playing Grand Theft Auto, were linked (albeit weakly) with less developed moral reasoning.

Overall, the evidence suggested adolescent moral development could be affected in some way by playing video games. However, there was little to no relationship between the university students’ moral reasoning development and video game play. This echoes previous research that found playing violent video games between the ages of 14 and 17 made you more likely to do so in the future, but found no such relationship for 18- to 21-year-olds.

This might be explained by the fact that 18 is the age at which young people in many countries are deemed to have become adult, leading to many changes and new experiences in their lives, such as starting full-time work or higher education. This could help support their moral development such that video games are no longer likely to be influential, or at least that currently available video games are no longer challenging enough to affect people.

The implication is that age rating systems on video games, such as the PEGI and ESRB systems, are important because under-18s appear more susceptible to the moral effects of games. But our research also highlights that it is not just what teenagers play but how they play it that can make a difference. So engaging with games for a wide variety of genres could be as important for encouraging moral development as playing age-appropriate games.