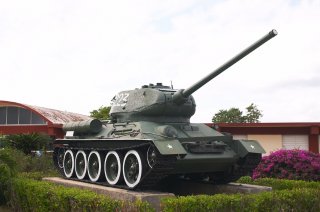 Here's What You Need to Remember: The T-34 had a lasting impact on tank design world-wide, and especially influenced Russian tank design after the Second World War. Many subsequent Russian tank designs took pages out of the T-34’s book, including wide treads, steeply sloped armor (especially at the front), and squat, low profile silhouettes.

Thirty T-34s rolled to a stop at a railway depot Vladivostok, awaiting transport. Huffing in the cold, they maneuvered crankily into a single-file line and rumbled onto a rusting transport wagon. Railroad transport workers lashed the tanks into place using thick spools of wire and chain, securing the squat machines into place for their journey west, towards Moscow.

These thirty war machines, all fully operational, were not on their way to the Eastern Front, but rather to Moscow, where they would be put on display as part of museum exhibits, used as movie props, or paraded through Red Square for Russia’s annual May 9th Victory Day parade, commemorating the end of World War Two and Russia’s victory over Nazi Germany.

The T-34 has enjoyed somewhat of a renaissance as of late. In 2019, a Russian-language film, T-34, was released, and became the second-highest-grossing Russian film of all time. But why does the T-34 still enjoy such legendary status?

Part of the T-34’s success was it’s high degree of mobility. In comparison to other tanks of the time, the T-34 had decent coil suspension, based on American inventor J. Walter Christie’s design, which offered considerably better cross-country performance than traditional leaf-spring suspension designs that had dominated Russian suspension up to that point.

The T-34 also had fairly wide treads that lowered ground pressure and more than adequately supported its moderate weight. This would prove crucial, as the T-34 was less likely to become bogged down in the soft earth and mud that typically covered wide swaths of the Eastern Front, especially in spring, when the snow and ground thawed into a soupy mess.

During border skirmishes with the Japanese in the late 1930s, it became apparent that gasoline engines were a bad choice for use in tanks. Penetrating shots from tanks or antitank guns that would otherwise not knock a tank out of action caused gasoline engines to catch fire or explode, a crucial vulnerability.

The T-34 opted for a relatively powerful V-12 diesel engine, which was less likely to ignite, and safer for the crew. Moderate 500 horsepower output was adequate for the tank’s weight, allowing the it to skip across the Russian countryside.

T-34 frontal armor was sloped at a steep 60 degrees. This steeply sloped angle allowed the tank to more easily deflect incoming tank rounds. An additional advantage was that the thinner sloped armor could offer equal or better protection than thicker, non-sloped armor.

The 45-47mm thick armor was a significant weight saver, and more efficient use of steel, an important war-time commodity.

German accounts of fighting on the Eastern front illustrate how effective this armor was and often remark on the difficulty of penetrating the hull, even from closer ranges. This difficulty prompted innovations in German antitank guns, increasing velocity and caliber to counter this new Soviet threat.

In comparison to the hulking, upright german tank designs, such as the Tiger I, the T-34 hugged the ground. It could be extremely cramped on the inside, especially during cold winter months, when the crew would be forced to wear bulky and voluminous winter clothing.

But the disadvantage in internal volume was a more low-profile design, which provided a smaller target to aim at, and was thus harder to hit.

Part of the T-34’s success was the sheer number that was produced, and the simplicity and speed at which they could be manufactured. Still, breakdowns were common, afflicting the T-34 much more often than allied or German tanks— a 200 kilometer march could knock out the T-34, which suffered from delicate tread pins, and sometimes came equipped with a second transmission in reserve to facilitate quicker field overhauls.

Although not noted for their reliability, parts could be scavenged from knocked-out tanks that littered European battlefields, especially in the later stages of the war.

While the T-34 is likely the second most widely produced tank in history, (and still serves in an active duty role in some armies), the design has also suffered more losses than any tank ever. Still, its impact on post-Second World War tank design cannot be overstated.