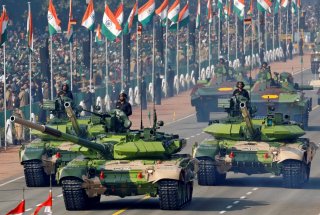 Here's What You Need to Remember: Dougherty faults India’s current defense strategy, which calls for defending India’s long, mountainous Himalayas border with China with light forces, and then counterattacking into the Chinese-occupied Tibetan plateau to seize key terrain and bring China to the peace table.

How can India defeat China in a war, even though China has a larger and more technologically advanced military?

By essentially using the same tactics that China successfully used to fight the United States in the Korean War in 1950-53. Hit-and-run tactics in which Indian troops lurk in the Himalaya mountains, and then swooping down to surprise Chinese troops in the valleys below.

That’s the argument of an American defense expert who believes that India and America face parallel threats. While America is concerned about the security of the Western Pacific, India must worry about its disputed Himalayas border with China – over which the two nations fought in 1962 – as well as a growing Chinese presence in the Indian Ocean.

“Strategists and military force planners in India and the United States are grappling with a similar set of challenges posed by China’s military modernization and increasingly aggressive foreign policy,” writes Chris Dougherty, a former Pentagon strategist who is now a senior fellow at the Center for New American Security.

The problem for India is that while the challenges for both nations are similar, their capabilities and resources are not. “Over the next ten years, the core difference between the United States and India regarding military competition with China is that the United States can feasibly pursue a strategy of fielding military forces superior to those of China—what defense planners sometimes refer to as a strategy of overmatch—while India cannot,” Dougherty writes. “Indian strategist and force planners must instead seek ways to offset their weaknesses and subvert Chinese strengths.”

Ironically, China faced a similar challenge in 1950, when it sent more than 300,000 ill-equipped peasant soldiers against a United Nations – mostly American – force that enjoyed vastly superior firepower, logistics, and air and naval supremacy. Yet by utilizing surprise and deception, and by using the cover of northern Korea’s mountains, the People’s Liberation Army was able to inflict a series of humiliating defeats on the U.S. Army in the winter of 1950-51, including the near-destruction of an American infantry division.

Dougherty faults India’s current defense strategy, which calls for defending India’s long, mountainous Himalayas border with China with light forces, and then counterattacking into the Chinese-occupied Tibetan plateau to seize key terrain and bring China to the peace table. “However, leaving the mountains to enter the plateau makes high-signature Indian forces vulnerable to the full capabilities of Chinese precision strikes and counter-maneuver,” Dougherty warns. “It would be foolhardy at best and potentially suicidal at worst....By attempting to defend the entire border, India will effectively defend none of the border.”

In an Indian Ocean naval war, in the short term, India would enjoy the advantage of concentrating its forces and operating near its bases, while Chinese forces would be split between the Indian and Pacific oceans. But in the long run, China would bring superior resources to bear.

“Given this rather dire assessment of India’s capacity for strategic competition with China, its position would seem to be hopeless, and yet it is not,” Dougherty argues. “India has several strategic advantages, most critically geography and a largely defensive strategic posture, which can allow its armed forces to be effective in countering China without massive increases in defense spending or major restructuring.”

For example, India can block chokepoints to keep Chinese ships out of the Indian Ocean. It can use cyberwarfare to disrupt Chinese operations.

“In both scenarios, India should exploit its defensive posture and geographical advantages to draw Chinese forces into disadvantageous encounters and stretch China’s lines of communication,” Dougherty argues. “Instead of traditional offensive maneuver, India should use unconventional forms of maneuver to attack the PLA’s critical systems, disrupt their operations, and impose costs on the Chinese regime.”

India's options include more investment in offensive cyberwarfare, long-range precision weapons, hypersonic anti-ship missiles, maritime surveillance and anti-satellite technology. Rather than expensive surface ships like aircraft carriers, India should focus on submarines. “While India’s preference for surface vessels over submarines may be supported by historical norms, it remains illogical in the face of Chinese naval superiority,” Dougherty writes. “A larger undersea fleet could allow India to impose considerable costs on the PLAN [People’s Liberation Army Navy] and potentially deny it from gaining maritime superiority in the Indian Ocean.”

India can also learn from U.S. experience in joint warfare to fix what Dougherty sees as a “badly stove-piped and sclerotic” Indian military command structure.

“India lacks a strong defense bureaucracy or a joint military body to oversee strategy,” he writes. “Instead, India’s military services dominate the discussion, with the Indian Army wielding by far the most power. The result, according to most observers of Indian defense issues, is a ground-centric military strategy and a budget that allocates too many resources toward Army personnel and not enough toward modernizing India’s badly outdated Air Force or undersized Navy.”

Dougherty admits that his analysis was inspired by China’s success in the Korean War. “I specifically thought about the PLA’s use of infiltration and counterattacks to impose costs on the United States in Korea,” he told the National Interest.

However, Korea is not the same as the Himalayas. “The major differences are two-fold. First, the Himalayan border is enormous width-wise relative to the Korean peninsula, so India will need better situational awareness and an ability move laterally across the front. Second, there was a flaw in the PRC’s strategy in that they took enormous casualties and the best outcome was a return to the status quo. They lacked a credible means of forcing the issue beyond the front line—their only recourse was to keep feeding forces into the theater.  That’s where things like cyberwarfare can come into play and help give India a means to force conflict termination.”