How the Iraq War Changed The Future of American Intervention 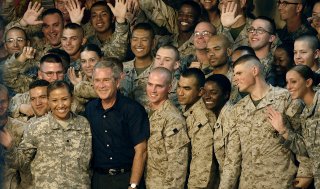 Here's What You Need to Remember: The biggest change likely comes in a reassertion of the traditional reticence of the American public towards foreign military intervention, a reticence that waned after the fall of the Soviet Union, but has again become a major factor in the making of American foreign policy.  And if this reticence limits America’s strategic flexibility to make horrifically tragic mistakes, then some good can come out of the Iraq War.