How Long Will the F-22 Raptor Stealth Fighter Remain Untouchable? 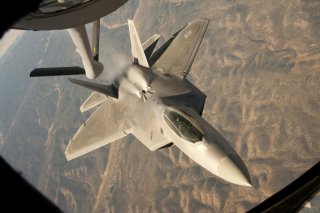 Here's What You Need to Remember: The F-22 Raptor has proven to be an aircraft that can engage an enemy but has speed on its side as well. Its engines are able to produce more thrust than any current fighter engine flying today, while the Raptor's aerodynamic airframe along with increased thrust allows it to cruise at supersonic airspeeds, greater Mach 1.5, without utilizing its afterburner – a characteristic known as supercruise.

Combining stealth, supercruise, maneuverability, and integrated avionics, coupled with improved supportability, the Lockheed Martin F-22 Raptor represented an exponential leap in warfighting capabilities when it was introduced in 2005. Even today, the F-22 cannot be matched by any known or project fighter aircraft and it is easy to see why this fifth-generation stealth warplane could remain part of the United States Air Force's fleet for decades to come.

Developed at the Aeronautical Systems Center at Wright-Patterson Air Force Base outside Dayton, Ohio, the advanced tactical fighter was designed as a supersonic, dual-engine fighter that could project air dominance, rapidly and at great distances and defeat threats attempting to deny access. Lockheed Martin teamed with Boeing to develop and build the extremely advanced tactical fighter to replace the F-15 as the United States military's front-line dominance fighter.

The first production F-22 was unveiled in April 1997, at a rollout ceremony hosted by Lockheed Martin, Boeing and Pratt & Whitney. It was the first of nine prototypes built for flight testing.

Since its introduction 15 years ago, the Raptor has been a critical component of the Global Strike Task Force, and even won the 2006 Robert J. Collier Trophy from the American National Aeronautic Association (NAA). The F-22 program was also awarded the Air Force Association's 2015 John R. Alison Award for outstanding contributions by industrial leadership to national defense.

During its development, the Air Force redesignated the aircraft the F/A-22 to reflect its multi-mission capability where it could take part in both ground attacks and in an air-to-air role. That designation was subsequently updated again to F-22A in 2005. The Air Force had originally planned to buy 750 of the fighters, however, the program was scaled back to just 187 operation production aircraft and the last F-22 was delivered in 2012.

A Mix of Weapons and Speed

The F-22 Raptor has proven to be an aircraft that can engage an enemy but has speed on its side as well. Its engines are able to produce more thrust than any current fighter engine flying today, while the Raptor's aerodynamic airframe along with increased thrust allows it to cruise at supersonic airspeeds, greater Mach 1.5, without utilizing its afterburner – a characteristic known as supercruise.

The aircraft is powered by two Pratt & Whitney F119-PW-100 turbofan engines with afterburners and two-dimensional thrust vectoring nozzles, and each provides 35,000 pounds of thrust. The F-22 can roar into action and get out just as quickly, and it can certainly hold its own against the opposition.

This fifth-generation fighter is also quite a weapons platform and in its air-to-air configuration it can carry six AIM-120 AMRAAMs and two AIM-9 Sidewinders; while in its ground attacks role, the F-22 also be configured to carry two 1,000-pound GBU-32 Joint Direct Attack Munitions internally. The fighter features on-board avionics for navigation and weapons delivery, and this is further enhanced by the addition of upgraded radar and up to eight small diameter bombs. In addition, the Raptor can be configured to carry two AIM-120s and two AIM-9s in its air-to-ground role.

In September 2014, the F-22 Raptor took part in its combat debut during coordinated strikes with other fighter jets and bombers against Islamic State (ISIS) strongholds in Syria.