How Marine Corps' KC-130J Tankers are Doubling as Gunships 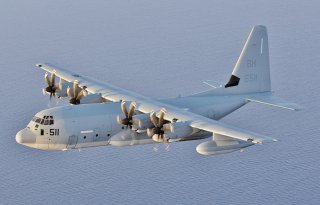 Here's What You Need to Remember: The Harvest Hawk has worked so efficiently because it operates in “permissive” environments where adversaries lack the anti-aircraft weapons to effectively shoot back. In these situations, the speed and defense capabilities of expensive, fuel-gulping jet fighters is superfluous, and a lumbering cargo plane can virtually hover in place in relative safety while benefiting from greater endurance and payload.

Sébastien Roblin holds a master’s degree in conflict resolution from Georgetown University and served as a university instructor for the Peace Corps in China. He has also worked in education, editing and refugee resettlement in France and the United States. He currently writes on security and military history for War Is Boring. This first appeared in June 2018.