How the Navy Almost Turned These Battleships Into ‘Supercarriers' 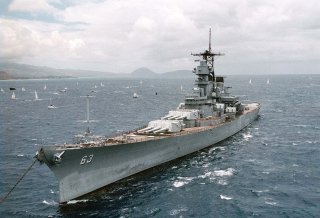 Here’s What You Need to Remember: In the early 1980s, four Iowa-class fast battleships originally built during World War II—Iowa, Missouri, New Jersey and Wisconsin—were taken out of mothballs and returned to active duty.

The battleships were modernized to include cruise missiles, ship-killing missiles and Phalanx point-defense guns. Returned to the fleet, the ships saw action off the coasts of Lebanon and Iraq. At the end of the Cold War, the battleships were retired again. All were slated to become museums.

Few people knew that returning the battleships to service in the ’80s had been only part of the plan. The second, more ambitious phase was a radical redesign of the massive warships that would have combined the attributes of battleships and aircraft carriers.

The resulting ship, a “battlecarrier,” was merely one of many schemes over the span of thirty years to modernize the most powerful American battleships ever built. The various proposals—all of them nixed—had the World War II-era ships carrying hundreds of U.S. Marines or launching Harrier jump jets or even firing atomic projectiles.

For the U.S. Marine Corps, this was a worrying trend. The seaborne invasion of Inchon during the Korean War showed that the age of amphibious assaults was not yet over. Military planners liked aircraft for their flexibility, but from the perspective of U.S. Marines, a ship that could sit off a coastline and bombard it with heavy guns for hours on end was vital.

At the same time, the Navy had put in orders for submarines to carry Polaris ballistic missiles. The proposed missile submarines could attack targets more than twice as far away as the Regulus II-armed battleship could while carrying four times as many missiles and spending most of their time underwater avoiding detection.

Kyle Mizokami is a writer based in San Francisco who has appeared in The Diplomat, Foreign Policy, War is Boring and The Daily Beast.