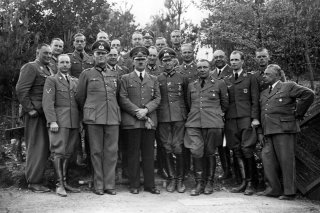 Key Point: No one was more responsible for Germany's defeat than Adolf Hitler.

In our last installment, we discussed the ways how Germany might have defeated the Soviet Union. In this article, we will discuss why Adolf Hitler was Germany’s greatest obstacle to winning World War II and how the war might have been won without if German generals could have prevented him from interfering in military operations. Hitler, a German dictator, has been considered a political genius by some and a mad man bent on world conquest by others, but the truth is that he was neither. Rather, he was a virulent anti-Semite who believed his life’s mission was to reunite Germany and lead an international crusade against Soviet Communism. He was also responsible for committing a series of strategic blunders and military miscalculations, some small and some great, that ended up ensuring Germany’s defeat. But what if German military leaders had been given the freedom to prosecute the war more wisely, resulting in a stalemate or even something resembling a Nazi German victory? Here are some things that Germany could have done differently to win the war:

Overthrowing Hitler or assassinating him was probably the single most important thing Germany could have done to win World War II, assuming it had ended up fighting it at all without him. Hitler made a series of critical strategic errors beginning with his decision to violate the Munich Pact in March 1939 and continuing with his decision to spare the British Expeditionary Force at Dunkirk in May 1940. By the time he decided to halt the German advance on Moscow in August 1941 and declare war on America in December 1941, he had all but guaranteed ultimate German military defeat.

There were over forty known coup or assassination attempts against Hitler, many with wide support by top German military leaders, including eleven German Field Marshals at various times. But the first and perhaps the most promising was planned to occur in September 1938 in response to fear by the German General Staff that Hitler’s demand for the German Sudetenland from Czechoslovakia would result in a war with Britain and France, which Germany was woefully unprepared to fight and would have surely lost. The Germans had only about one-third as many divisions as they were able to mobilize in September 1939 and the Czech army had the same number of troops as the Germans did and six more army divisions! Needless to say, they would have had to use the bulk of the German Army to successfully invade leaving Germany’s western borders largely undefended against a potential French invasion and occupation of Germany’s Rhineland industrial region. Thus, the German generals led by Gen. Ludwig Beck felt it would be necessary to remove Hitler from power in order to avoid a near certain German military defeat.

These senior military anti-Hitler conspirators, also known as the Oster Conspiracy, after the name of the German general who initiated it, planned to arrest or assassinate Hitler the moment he gave the invasion order, overthrow his Nazi regime, and restore Kaiser Wilhelm II as Emperor of Germany. Germany’s chief of the general staff at the time, Col. Gen. Franz Halder, reportedly carried a loaded pistol at all times in his meeting for Germany in case the time was right to arrest or kill Hitler. However, implementation of the plan depended on the British issuing a declaration guaranteeing Czechoslovakia from German military aggression and threatening to declare war if the Germans invaded. A strongly worded letter from Chamberlain to Hitler that Britain would declare war on Germany if they invaded Czechoslovakia may have been all it took to trigger the overthrow of Hitler and save the world from the devastation of World War II. The coup plotters sent an agent to tell former British prime minister Neville Chamberlain of their plan to overthrow Hitler. They wanted him to issue such a declaration to justify Hitler’s ouster. Unfortunately, the British Cabinet rejected their proposal. This plan to overthrow Hitler lost much of its senior German military support after France and Britain signed the Munich Pact, which gave into most but not all of his demands without war. It goes without saying that a post–Nazi German government would never have forcibly expelled the Jews, let alone mass murdered them in the Holocaust as Hitler did.

The coup plotters continued to plot to overthrow Hitler after the signing of the Munich Pact, but senior military support from the coup was much reduced following Hitler’s quick string of victories which the Germans were able to achieve from 1938–1941. British prime minister Neville Chamberlain remained a strong supporter of German efforts to overthrow Hitler until his untimely death in November 1940, but his successor, Winston Churchill, refused repeated requests to help Germans resistance leaders trying to assassinate him. One of the few ways that a Hitler assassination would have worked is if his enemies used nerve gas. Sontact between his skin and a single drop of nerve gas could have killed him within twenty minutes, but it appears that German resistance leaders never seriously contemplated using this method of assassination.

Hitler’s insistence on making all of the major military decisions, instead of allowing his generals to run the war resulted in a series of avoidable mistakes that assured Germany’s ultimate defeat. Not only did he halt the advance of Army Group Center and prevent it from taking Moscow in summer 1941, but he issued “no-retreat” orders that led to the loss of hundreds of thousands of German troops as the tide of war began to shift against them. Entire German armies were surrounded and captured as the tide of war began to shift against them. Some historians have argued this “no-retreat” order prevented the German military withdrawal in the face of the Soviet offensive in the winter of 1941 from turning into a rout, which may be true, however, that was an exception. Also, he ordered militarily dubious offensives at Stalingrad in August 1942 and at Kursk in July 1943 and later the Ardennes at the Battle of the Bulge in December 1944 and in Hungary in March 1945, which resulted in heavy German losses without which Germany could have likely defended against successive Soviet offensives at least a couple years longer.

Hitler spent over $2 billion (as much as the United States spent on the Manhattan Project developing the atomic bomb) developing and producing a large arsenal of Tabun and Sarin nerve gas, which were much more deadly than the Allies’ stocks of mustard gas. The stockpile weighed about twelve thousand tons. Still, Hitler declined repeated requests from his military commanders to employ it against enemy troops on the battlefield—even when Germany was in the process of being totally overrun by the Western Allies and Soviet Red Army from January to May 1945 and he was preparing to commit suicide. The Germans could have employed their vast stocks of nerve gas to potentially repel the Allied amphibious invasion of Normandy on D-Day. The Germans could have delivered Sarin nerve gas via mortars, of which Germany had considerably more of than did the Allies, along with other types of artillery rounds since delivery by air in the face of Allied air superiority would likely have proven much more challenging. Winston Churchill, on the other hand, had no such scruples and reportedly planned on using mustard gas against German troops on the beaches if they had ended up invading Britain. Nerve gas might have also been used successfully to repel Soviet troops advancing on eastern Germany from Berlin, given favorable wind conditions. Interestingly, all German mortars and multiple rocket launchers above ten centimeters in diameter during the war were designated by the Germans as Nebelwerfers, which translates to “smoke or fog throwers,” and were initially assigned to the German Army Chemical Corps, being primarily designed to deliver poison gas and smoke rounds.

Another related major mistake was Hitler’s decision to control the Panzer divisions in Normandy instead of giving full control to Rommel to repel the Allied landing forces on D-day while he slept through D-day and missed the opportunity to do so believing the Allied ruse that the invasion of Normandy was merely a diversion from the main planned allied landings.

When Hitler was appointed as Reichskanzler in 1933, his virulent anti-Semitism, which he developed following the German surrender at the end of World War I, caused all the top Jewish German and Hungarian scientists, including most notably Albert Einstein, who had been working at the Prussian Academy of Sciences in Berlin, to emigrate to the United States and United Kingdom. Their assistance proved critical in aiding the U.S.-led Manhattan Project in helping the Allies develop the atomic bomb by July 1945. However, had Hitler and the Nazis never enacted discriminatory laws against Jews, Einstein and other European scientists might have helped Germany develop the atomic bomb first, which Germany then could have employed to help break the deadlock on the Eastern Front and produce a more favorable peace settlement with the Soviet Union. That, in turn, would have catapulted Germany to military superpower status along with the United States and Soviet Union.