How the North American T-28 Went From Trainer to Warbird 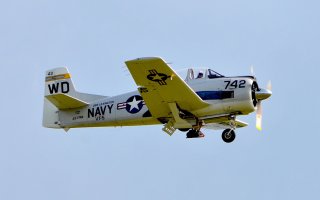 Here's What You Need to Know: The T-28 practice aircraft became very useful in counter-insurgency.

When it entered service as a trainer in the early 1950s, few would have likely expected the North American Aviation T-28 Trojan to see use in a combat role. However, the piston-engine T-28—which was designed to replace the World War II era T-6 Texan trainer—possessed such higher performance than its forerunner that it was employed as a counter-insurgency aircraft.

In its training role, the Trojan’s tricycle landing gear helped teach pilots to take off and land in the same fashion as the high-performance aircraft they were training to fly. The T-28 became the primary trainer for the United States Air Force, and was soon adopted by the U.S. Navy and U.S. Marine Corps. Even when the Air Force phased it out as the primary pilot training platform in the early 1960s, it continued to use it for limited training for special operations aircrews and for select foreign military personnel, while the Navy and Marine Corps (as well as Coast Guard) continue to rely on the Trojan into the 1980s.

Beyond its use as a trainer, the T-28 was employed in combat in the 1960s—and was reportedly first used by the CIA in the former Belgian Congo, while the French Armée de l’Air (Air Force) used modified Trojans in a close air support role in Algeria.

During the Vietnam War, the T-28 saw service with the Republic of Vietnam Air Force (RVNAF), where it was used in support of Army of the Republic of Vietnam (ARVN) ground operations. The original mission of the aircraft was to train South Vietnamese pilots, but the aircraft proved well suited to a ground support and counter insurgency (COIN) role. Fitted with six underwing hardpoints and redesignated the T-28D “Nomad,” a total of 393 of the aircraft were converted and during the war, and a total of twenty-three were lost.

It was a T-28D Nomad that also has the dubious distinction of being the first U.S. fixed wing attack aircraft to be lost in South Vietnam when Capt. Robert L. Simpson, USAF, Detachment 2A, 1st Air Commando Group, and Lt. Hoa, RVNAF, were shot down by ground fire on August 28, 1962.

While the T-28D Nomad was withdrawn from combat in Vietnam in 1964, it continued to operate with the 60th Special Operations Squadron on missions over Laos and Cambodia.

Additionally, after Royal Lao Air Force Thai national Lt. Chert Saibory defected to North Vietnam with his T-28, the aircraft was commissioned into the North Vietnamese Air Force as its first fighter!