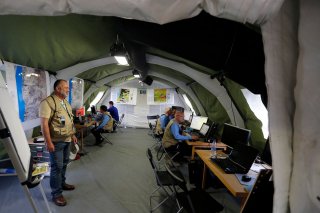 It’s difficult to imagine quite how alarming it would have been for the world’s meteorologists monitoring the atmosphere during the nuclear tests in the 1950s and early 60s. The radioactivity released in the Arctic and South Pacific test sites caused patterns of electrical disturbance that were apparent thousands of miles away, from Japan to the UK.

Diligent observers would have seen their regular measurements, which had been reliably similar every day, suddenly show catastrophic change or even become impossible to record. They couldn’t have known what any potential impact on the world’s weather might be.

Sixty years later, my colleagues and I have used their historical records to demonstrate that the tests may indeed have changed rainfall patterns far from the test sites. This knowledge could prove useful for geoengineering research, which is exploring how electric charge could influence rain, or even relieve droughts or prevent floods, without the use of chemicals.

The nuclear bomb detonations of the cold war, when east and west vied to produce ever bigger bangs under the banner of “testing”, must have been a disturbing time for anyone to live through. The remoteness of the nuclear test sites did not prevent the radioactivity released from being transported widely, through the upper level winds of the atmosphere and rainfall to the surface. Even London rainwater, regularly sampled for radioactivity, was imprinted with the sequence of American and Russian test explosions.

The actual patterns of transport were put to good use by meteorologists, as the radioactivity provided a detectable marker with which to trace the atmospheric circulation. But another consequence of radioactivity in the air is that it releases electric charge. This was confirmed following the radioactivity released by the Chernobyl and Fukushima reactor accidents.

We knew that electric charge can affect water droplets in clouds. These grow by colliding with other droplets until they are large enough to fall as rain. When these droplets are small, electric charge can make them more inclined to stick to each other rather than bounce off. Whether this has any meteorological application has been difficult to test, but the weapons test period presents a serendipitous opportunity to do so.

Many of the meteorological observations made at the time were particularly thorough and of high quality, perhaps motivated by the International Geophysical Year of 1958, which had encouraged an expansion in scientific observations. We chose to analyse Met Office measurements from Kew (near London) and from Lerwick (in Shetland, Scotland), comparing rainfall characteristics during the period when radioactivity was at its greatest to times with less radioactivity. These two sites are far enough away from each other to experience different weather but close enough to encounter similar levels of radioactivity from the clouds high above them.

Demonstrating how charge is linked to non-thunderstorm clouds has particular relevance for our efforts to model clouds as part of the UAE Research Program for Rain Enhancement Science. This international project ultimately hopes to find new ways of increasing rainfall in places where water is scarce.

Our research has involved designing and engineering small robotic aircraft to help gather new atmospheric data. We’ve already found that charge is remarkably abundant in desert regions, which we can use to improve our models and predictions.

Our particular application also underlines the enduring value of high quality past measurements, such as those of the nuclear weapons era. In this case, records made in unusual and disquieting circumstances are helping answer a scientific question for our own time.