How One Missile Won the Yom Kippur War for Israel 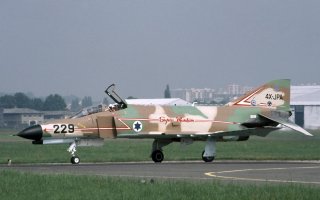 Here's What You Need to Remember: While Cooper’s claims are controversial, they offer an interesting technical narrative as to why the Arab air forces performed so poorly during the Yom Kippur War.

Israel’s 1973 war, otherwise known as the Yom Kippur War, cemented the country’s reputation as a military juggernaut in the region. Despite efforts by Arab armies to modernize and reform their military forces, the Israel Defense Forces scored a decisive military victory, repelling all attacks and gaining territory on some fronts.

In the air, the Israeli Air Force proved dominant, scoring double the kill ratio they had during the 1967 war. They achieved this despite the delivery of modern surface-to-air missile (SAM) systems, MiG-21 jets, and missiles to the Arab air forces. While some chalk this up to superior training and military culture, Austrian military aviation journalist Tom Cooper has suggested that the failure to perform by the Arab air forces was caused in part by substandard Soviet air-to-air armament. Cooper focuses his blame primarily on the R-3S missile, which was the primary air-to-air missile arming Arab fighters. Secondary blame is placed on the GSh-23L cannon found on MiG fighters.

Cooper leads with the assertion that Arab air force pilots were not under trained relative to their Israeli or even NATO counterparts. According to his figures, during that period, Egyptian and Syrian fighter pilots were fly possibly double that of NATO fighter pilots, with a greater proportion dedicated to tactical training. While other works may give doubts to the quality of this training, Cooper seems to solidly assert that this was not a factor hindering the Arab air force pilots, even in other articles in his series.

As for the missile, Cooper asserts that a significant portion fired went “dumb” or “ballistic” straight off the rail and failed to track. Unfortunately, Cooper doesn’t seem to have a figure for total missiles fired, so the ratio of missiles that went off the rail ballistic cannot be tracked. Due to these failures to track, and the missile’s difficulty in tracking maneuvering targets, Cooper estimates that only 3 to 5 percent of R-3S missiles hit their targets during the war.

The failure of the R-3S missile is rather interesting as the R-3 series of missiles was a direct clone of the American AIM-9 sidewinder, which armed Israeli jets facing off against the Arab air forces during the war. However, the R-3S seeker was considered to be far inferior to that of the AIM-9Ds and AIM-9Gs fielded by the Israelis, and the AIM-9G also featured improved control surfaces and other upgrades, as it was one of the first “second generation” AIM-9 missiles. AIM-9Gs were practically cutting edge tech at the time and were rushed to the Israeli Air Force mid conflict as part of Operation Nickel Grass. The first kill was scored with an AIM-9G just a day after the first deliveries took place.

Cooper notes that the Indian Air Force, which also was equipped with R-3S missiles, junked practically their entire stock following the 1971 conflict in which the missile failed to perform. The Soviets were also evidently aware of the missile’s shortcomings, as they were developing their own clean-slate missile, the R-60, as well as a proper seeker upgrade to the R-3S in the K-13M missile. However, neither of these missiles equipped Arab air forces during the 1973 war.

Cooper also states that the GSh-23L cannons equipping the MiG-21s were loaded with subpar ammunition, which would only fuse prematurely, with hits resulting in only superficial damage. He supports this with the assertion that flashes from gun hits but not damage was observed on gun camera footage and French Air Force pilots who observed the conflict noted that the Israeli Mirages got hit, but didn’t suffer damage. Cooper also asserts that the cannon was slow-firing and lacked muzzle velocity, but this claim does not hold up to scrutiny when comparing the GSh-23L and the DEFA cannons on the Mirage. The GSh-23L has a higher rate of fire and similar muzzle velocity to the DEFA, albeit the DEFA fires a larger round. Only the 20mm M61 Vulcan that armed American aircraft has a significant rate of fire and muzzle velocity advantage over the GSh-23L among aircraft cannons of that period, at the cost of reduced rate of fire during the first fractions of a second after the gun is fired due to the need for the barrels to spool up.

While Cooper’s claims are controversial, they offer an interesting technical narrative as to why the Arab air forces performed so poorly during the Yom Kippur War. It also emphasizes the fact that contemporary air combat is very much about technology. If a plane’s missiles and guns are significantly worse than the opposition, even the best pilots and training will not win a battle.