How "Project Convergence" Will Reshape the U.S. Military 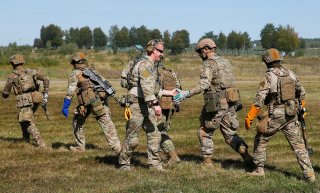 Many in defense would be cautious about using the word ‘renaissance,’ but in 2018, Dr. Mark Esper declared just that and argued, “the time for change is now.” The Army is entering a new era, and after observing Project Convergence in Yuma Proving Ground last week, it is abundantly clear that the Army is indeed reaching a new level of experimentation and testing. Dr. Esper’s vision of a renaissance is unfolding right before our eyes.

The Army is converting ideas, prototypes, and various modes of operating (i.e., new ways of fighting) into new capabilities.  This is a departure from the past, where a lion share of the budget and programming narrowly focused on incremental upgrades to existing platforms, adding armor, speed, reach, and lethality at exorbitant costs, over long periods of time. This approach is antiquated, and the Army is aggressively pursuing innovation to attain a decisive edge over rising competitors.

A recent podcast by 1st Special Forces Command’s Chief of Staff, Colonel Ed Croot, and The Kill Chain author, Christian Brose, clarifies the distinction between modernization and innovation. The key to innovation is finding cost-wise solutions to operational problems the nation is facing on a fast-paced and rapidly changing battlefield. At best, modernization has been the approach to make incremental changes, but innovation is now the collective aim.

Early in Army Futures Command development, there was a concern on whether or not the new command could cultivate an “innovative culture.” The inaugural Project Convergence, led by Brigadier General Ross Coffman and his Next-Generation Combat Vehicle (NGCV) Cross-Functional Team (CFT), validated Army Futures Command’s ability to bring diverse talent and capability together from across industry, sister services, and other CFTs to “fail early, fail small, and learn fast” and prototype warfare.

In an unprecedented level of collaboration, on the hardpan desert of Yuma Proving Ground, Project Convergence has throttled the needle forward and sped the kill chain from minutes to seconds, combining over thirty technologies to alter the speed, complexity, and overall geometry of the battlefield. To be sure, the experimentation was not perfect, but the aggressive use of machine learning and artificial intelligence to sense, detect, and assign shooters to service targets was fast and rather remarkable.

To build on this success, we propose two ideas to (1) accelerate the transition of capability through experimental units and (2) garner increased investment and interoperability with allies and partners.

1. Experimental Units. Advanced research organizations like DARPA and the Army Research Laboratory (ARL) routinely study how they might improve technology transition to units and organizations within the Department of Defense. Past case studies show how experimental units aided the acceleration of technological adoption through repetitive testing in field environments and routine interaction between soldiers, scientists, and engineers. Take the example of the 1st Air Cavalry Division.

Before Vietnam, the 11th Air Assault Division (Test) at Fort Benning, Georgia, served as a tactical training and experimental testbed for tactical maneuvers with helicopters. The troubling events in Vietnam, combined with the challenges of mobility and restrictive terrain, caused the test division to be converted into a combat division, the 1st Cavalry Division (Airmobile).

The prior experimentation and testing of the division validated the utility of air assault operations in combat. The 1st Air Cav (as it was often called) excelled in cavalry missions to reconnoiter, screen, delay, and conduct raids over expansive terrain. Its most successful air cavalry mission was the relief of Khe Sanh to aid US Marines. The air mobility concept influenced the development of other capabilities in other services to include special operations units, with the most recent successful air raid to kill or capture Osama bin Laden.

The Army and the Joint Force should examine how modern experimental units might help accelerate technology transition and adoption. The success and speed of change with Project Convergence warrant such an examination. The integration of units and partners early and often amplifies innovation, leading to the next point.

2. Incentivize Allied and Partner Investment and Interoperability. Last month during the 2020 Maneuver Conference, Brigadier General Matthew Van Wagenen proposed that the key to unlocking unlimited potential across the allied enterprise is multinational interoperability. A highly-integrated multinational kill chain will further deter would-be adversaries, and our alliance formations need to operate with increased reach and dispersion, in a fast-paced and connected environment.

We need our allies and partner to have the ability to collect on information requirements to support the close and deep fight, probe enemy gaps, and, if needed, strike hard and fast, destroying as much enemy force as possible with minimal friendly economy of force, speed and precision. In essence, they need to plug into our battle networks with their sensors and shooters while adhering to interoperability standards and their national caveats.

Army Futures Command plans to include allied forces in their 2022 Project Convergence capstone but coordination to make that happen needs to begin now. There need to be incentives to drive collaborative investments and unconventional partnerships to deliver interoperability. Data standards and sharing agreements will require not just military and industry partners but also policymakers and diplomats.

Whether it is in Europe or on the Korean Peninsula, our combined headquarters require the ability and capacity to rapidly coalesce an alliance of forces, spanning multiple echelons and across multiple domains, into a highly dense digital environment. Success requires digital alignment across all warfighting functions and a common set of tools in a mission partnered environment. U.S. Army Europe has made progress in this space with the DEFENDER series of exercises, and this work should continue to inform experiments like Project Convergence.

What we witnessed in the scorching hot desert of Yuma Proving Ground is genuinely incredible. The collaborative ‘team of teams’ approach of the CFTs and the increased risk tolerance by senior Army leaders is extraordinary. Success must continue, and the incorporation of experimental units can accelerate the transition of technology and elicit feedback, ideas, and buy-in from soldiers. By incentivizing allied investment and participation, innovation can flourish faster, and the costs can be shared by more. After all, as General Mark Milley once pointed out in the Conference of European Armies, “it is our network of allies and partners that serves as a centerpiece for modern deterrence.” Our network of partners and allies is a strength and competitive advantage our adversaries do not have.

The views and opinions expressed are those of the authors and do not reflect any entity or organization of the U.S. Government or NATO.

This article first appeared in RealClearDefense.