How Russia Is Making China a Military Powerhouse 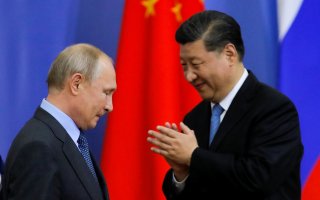 Here's What You Need to Know: Russian president Vladimir Putin has hinted at a Sino-Russia military alliance. In some respects, they already are—at least as far as Beijing is concerned.

Russian President Vladimir Putin said that a military alliance between China and Russia is not needed right now, but that it can’t be ruled out as a future prospect. Putin’s comments follow decades of tightknit Sino-Russian cooperation across a wide gamut of defense and regional security categories.

During his prepared remarks at his annual Valdai Discussion Club appearance late last week, Putin noted that “China is moving quickly towards superpower status.” When queried on the future possibility of a formal Russia-China military alliance, Putin responded, “we have always assumed that the extent of our relationship has reached such a degree of cooperation and trust that we don’t need it.” But, he added, “it is theoretically quite possible to imagine it.”

Putin went on to stress that the Russo-Chinese relationship extends far beyond immediate military cooperation, stretching into the realm of technology transfers. “Without any doubt, our cooperation with China is bolstering the defense capability of China’s army,” said the Russian President.

Putin’s statement is particularly striking in its historical context. Since the early days of China’s military modernization drive, the PLA has relied extensively on Soviet— and now Russian— technical expertise, licensing deals, and import contracts.

Take, for instance, China’s People’s Liberation Army Air Force (PLAAF). Among the PLAAF’s first models were the MiG-9 and MiG-15 jet fighters, transferred from the Soviet Union. The PLAAF’s subsequent J-5, J-6, and J-7 fighters were derivatives of the Soviet MiG-17, MiG-19, and MiG-21 respectively. The J-11, currently one of the most numerous fighter models in the PLAAF’s roster, is a close variant of the prolific Soviet Su-27, not without controversy. More recently, China purchased two batches— for a total of 24 units— of Russia’s advanced Su-35 air superiority fighter.

Similar trends are readily observed across the Chinese People’s Liberation Army Navy’s (PLAN) roster. As many as 12 Soviet Kilo-class submarines are currently in PLAN’s service, while China’s first Liaoning (Type-001) aircraft carrier was built from the imported hulk of the Soviet Kuznetsov-class Riga aircraft carrier. The Type-002 successor to the Liaoning is based on the same Soviet-inspired design. Soviet and Russian systems also comprise a large swathe of the PLA’s missile defenses. China has imported as many as four Soviet S-300 missile system variants, including a sea-based version. The PLA likewise became the first international buyer of Russia’s flagship S-400 missile defense system, signing a contract for the delivery of two regiments in 2014.

While not formally considered as a military alliance, this steady stream of technology transfers intertwines with a long history of joint war games and regional military exercises to form the bedrock of a well-established, strategically salient Russo-Chinese security relationship.

Putin’s Valdai Club statements were read by some Western outlets as a signal of deepening Sino-Russian ties, but this wouldn’t be the first time that the Kremlin has teased further military integration with China as a source of leverage against NATO.

Beijing, for its part, reacted tepidly to Putin’s comments, with Chinese experts suggesting that they comport more with Russian geopolitical posturing than a concrete diplomatic proposition. As Shi Yinhong, a Chinese academic and advisor to the PRC’s State Council, told the South China Morning Post, “US-China tensions are in such bad shape that a military conflict is possible. The chance that Russia wants to be an ally of China is very low... it’s mainly a sign of Russia’s aspiration to be an important neutral actor to force the United States or China to give them important concessions.”

Mark Episkopos is now a national security reporter for the National Interest.