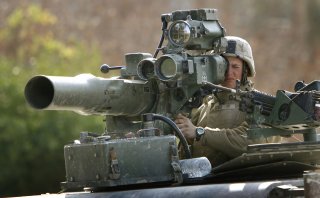 Here's What You Need to Remember: While the T-90A is still outgunned by Western main battle tanks, it does sport number of defensive systems particularly effective verses anti-tank missiles that (all but a few) Abrams and Leopard 2 tanks lack—and anti-tank missiles have destroyed far more armored vehicles in recent decades than tank main guns have.

Janovský says he is not aware of T-90s being lost to shorter-range weapons, “since the regime rarely used T-90s in close combat, especially after two were captured.” The T-90 has in fact been “relatively successful” in Janovský’s opinion, despite losses due to “overconfidence and poor coordination with infantry, which has been a long term problem of the SAA.”

According to Janovský, the T-90’s most useful feature has actually proven to be its superior optics and fire control computer compared to earlier Russian tanks. “T-90s performed well when they had an opportunity to shoot at rebels from long distance or at night, when modern optics and fire-control computer proved to be a major advantage.” Indeed, the T-90A model began receiving French-built Catherine FC thermal imagers in the mid-2000s.