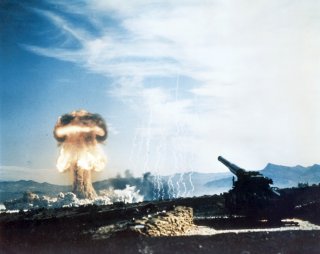 Here's What You Need To Remember: If the Tsar Bomba explosion was a stunt, the other biggest Soviet tests weren't. 1962 was the last year of atmospheric nuclear tests for the Soviet Union and the United States, and both sides rushed to prove weapon designs.

The Soviet Union's swift strides towards nuclear arms alarmed American officials in the 1950’s. "First Lightning" (called "Joe-1" in the West)—the first Soviet nuclear test—announced Moscow's new military power less than three months after lifting the Berlin Blockade in May 1949. The twenty-two-kiloton shot copied the U.S. Trinity test as closely as possible to achieve early success; the rushed development actually stalled the Soviet program for over a year, with the second test occurring in September 1951.

Steve Weintz, a frequent contributor to many publications such as WarIsBoring, is a writer, filmmaker, artist and animator. This first appeared three years ago.