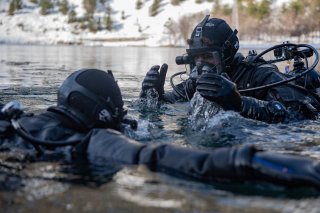 Key Point: This was the first time in five years that Green Berets conducted ice combat diving training. The dive teams of the 10th Special Forces Group are the designated cold-weather dive teams.

Recently, combat divers from the 10th Special Forces Group had the opportunity to hone their arctic combat diving skills.

A wave of cold weather in February created the conditions for some ice combat diving in the Townsend Reservoir on Fort Carson, Colorado, which is where the 10th Special Forces Group is headquartered.

The training allowed the dive team to familiarize themselves with specialized ice diving gear and get a better grasp of arctic diving. Particular attention was paid to the special wet suits that are used for cold weather combat diving.

According to a press release, “Green Beret took their turn disappearing under the ice sheet into the dark freezing water while tethered to a safety diver who stood a few feet into the reservoir. The submerged diver would swim out into the reservoir and punch through the ice, giving a thumbs-up to signal that everything was ok. After a few more minutes, each diver emerged from the water and removed their gear with the help of their teammates.”

There are a couple of reasons for this. The Special Forces Underwater Operations School (SFUWO) is arguably one of the toughest courses in the Army special operations community. It is not uncommon for qualified Green Berets and Rangers to fail the SFUWO. As a result, it has been consistently hard to get enough qualified combat divers to man the dive teams. A second reason has been a lack of understanding and appreciation of the capability by senior Army special operations commanders. Unlike Navy SEALs, Green Berets used combat diving solely as an insertion method—a way to the job rather than the job. SEALs, conversely, use combat diving for maritime special operations as well, such as planting limpet mines on an enemy vessel.

This was the first time in five years that Green Berets conducted ice combat diving training. The dive teams of the 10th Special Forces Group are the designated cold-weather dive teams. The training event offers a couple of observations.

First, the lack of support for the Army Special Forces Combat Diving community. The past two decades of war in the Middle East have offered little incentive to fund and support combat divining training. Another, more positive, observation is the shift in mentality when it comes to combat diving. The exercise itself is proof that the Pentagon’s focus on Great Power Competition with near-peer adversaries, such as China and Russia, has prompted Army special operations leaders to pay more emphasis to the combat diving capability. Of course, to have a real impact, that emphasis needs to remain consistent.

This article first appeared at Sandboxx in April 2021 and is being republished due to reader interest.