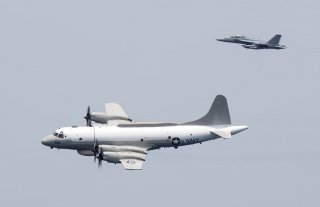 Here’s What You Need to Remember:​ Stealth fighters, bombers, and drones are without question here to stay. However, many have expressed concern that less stealthy or highly maneuverable aircraft are only truly deployable in uncontested environments due to their potential vulnerability to modern air defenses.

What if larger, potentially more vulnerable platforms such as a B-52 bomber or P-8 Poseidon submarine-hunting plane were somehow able to better protect themselves from attack by technologically sophisticated weapons? A solution might be found in the emergence and imminent deployment of a new decoy “jammer” designed to trail behind large aircraft to divert and thwart, jam, or even intercept enemy missile attacks. The U.S. Navy just awarded a new, fast-turnaround deal to BAE Systems for the AN/ALE-55 fiber-optic decoy jammer for its Poseidon submarine-hunting aircraft, called the Radio Frequency Countermeasure (RFCM).

“AN/ALE-55 fiber-optic towed decoy jams signals with a high-powered response from off-board the aircraft at the end of the towline. Missiles are guided safely away from the aircraft to the towed decoy,” a BAE Systems report states.

Available images show what looks like a tethered, or “towed” jammer traveling in the air underneath or behind an aircraft, a system likely engineered with electromagnetic signal technology to attract incoming enemy missiles, throwing them off course.

“Unlike traditional straight-through repeaters which are only effective versus continuous wave (CW) threats, our fiber-optic towed decoy works in concert with the aircraft’s onboard electronic warfare (EW) system to use a variety of countermeasure techniques to suppress, deflect, and seduce pulsed and CW RF threats,” the BAE essay explains.

The military services have for many years been engineering various radio frequency countermeasures to both detect and destroy the guidance systems associated with enemy attacks. RF guided weapons can essentially be fed a phony or alternative electronic signal to be guided away from the intended target.

What a system like this can do is certainly widen the mission envelope of larger signature aircraft potentially vulnerable to long-range, precision tracking systems designed to send electronically guided weapons. Such protection could, for instance, prove to be of tremendous value in places such as the South China Sea. P-8 planes, aircraft that will be receiving these jammers, were the platforms that took video images of Chinese land reclamation or phony island-building in the vicinity.

An ability for these planes to counter ground-air attacks and operate with greater maneuverability and freedom in these kinds of coastal land-maritime areas bring substantial tactical relevance. Submarines often operate somewhat closer to shore for reconnaissance or land-attack missions, therefore it is important to develop an improved ability for sub-hunting planes to operate in spread apart island areas such as the South China Sea. Furthermore, China was observed to have built landing strips on some of the islands for fighter jets. Beijing also installed weapons such as air defenses in the area, a maneuver placing P-8s or other large aircraft at risk. Clearly, the intent would be to deny access to areas deemed to be of great strategic value to China, yet these kinds of decoys, as well as other countermeasures or even stealthy attack planes and bomber patrols, might also work as deterrents.