How Terrorists Could Use Biological Weapons to Kill Millions 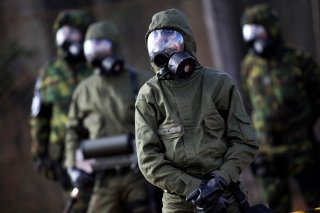 Here's What You Need to Remember: Kofi Annan, former secretary general of the United Nations, once stated that “the most important under-addressed threat relating to terrorism…is that of terrorists using a biological weapon.” The 2001 anthrax attacks, which began a week after 9/11, fomented fears about the possibility of bioterrorism. The difficulty today is distinguishing between threats that are inflated and threats that are credible.

In 2014, a laptop belonging to a member of the Islamic State (ISIS) was shown to reporters. The device contained information on creating biological weapons including the bubonic plague. While ISIS was never definitively shown to have actively pursued the development of bioweapons, instead using chemical weapons in Syria and Iraq, other rogue non-state actors like Al Qaeda have made concerted efforts to develop, obtain and use bioweapons.

Two recent phenomena are reasons to reexamine the threat of bioterrorism. First, renewed tensions with Iran, which previously conducted bioweapons research and development, could potentially recommence the development of bioagents which in turn could fall into the hands of rogue non-state actors. Second, government budget cuts mean that national programs are under increased public scrutiny. The United States reportedly spent $14 billion dollars on biodefense in the three years following the 9/11 attacks. “A substantial amount of money has been invested in biodefense,” wrote Ari Schuler, author of a notable report on biosecurity, “but the…money is no indication of success or failure.” For these two reasons, this is an opportune moment to reevaluate the threats posed by bioterrorism.

Bioweapons were astutely called by Hashemi Rafsanjani, speaker of Iran’s parliament in 1988, “the poor man’s atomic bomb.” Biological weapons don’t necessarily require the technical sophistication of a nuclear bomb, yet still have the potential to wreak catastrophic havoc. According to a report at the 1996 North Atlantic Assembly, Several hundred thousand deaths could be caused in a crowded urban area by four tonnes of VX or only 50 kilograms of anthrax spores and a single ounce of anthrax introduced into the air-conditioning system of a domed stadium could infect 70-80,000 spectators within one hour. These frightening statistics, however, belie the relative lack of historical precedent for biological attacks; the Monterey Database indicates that “incidents involving biological agents have been quite rare, with 66 criminal events and 55 terrorist events over the 40-year period from 1960 to 1999.”

One of the reasons biological attacks are infrequent is the preparation complexity required to create an actionable weapon. The Japanese cult Aum Shinrikyo, for instance, attempted to create a working bioweapon for years—and tried and failed on at least ten occasions to release biological agents in an aerosolized form—before instead reverting to sarin nerve gas, which in 1995 still killed twelve people in the Tokyo subway. Analysis by Jonathan Tucker in 1999 reported that of the dozen cases the FBI investigated per year in the 1990s involving chemical, biological, radiological or nuclear materials, 80 percent were hoaxes.

Still, despite the somewhat stochastic historical distribution of bioterrorism incidents, individual cases of attempted bioterrorism make for frightening reading. There was the R.I.S.E attack of 1972, where college students influenced by ecoterrorist ideology planned aerosol attacks and the contamination of urban water supplies. The students were stopped when cultures were discovered. The Minnesota Patriots Council in 1991 targeted government officials with ricin delivered through the skin, but were stopped and arrested by the FBI through the use of informants. And Larry Wayne Harris in 1998, seeking to create a separate homeland for whites in the United States, obtained plague and anthrax and planned to disseminate them via crop duster. He was arrested after openly discussing bioterrorism in public. None of these cases, however, involved organizations as broad, ideologically predisposed towards mass terror, and complex as ISIS or Al Qaeda.

There are generally three impediments to the deployment of a biological weapon by a rogue non-state actor: technical development, resource procurement and weapon deployment. First, the largest impediment to developing a bioweapon is the technical knowhow required. A report from researchers at the Sandia National Laboratory noted that “even a low-consequence event requires a considerable level of expertise to execute.” From cultivating strains to potentially aerosolizing biological agents, the high-bar of knowledge serves as the most important barrier to completion. Second, non-state actors often struggle to obtain the resources and facilities necessary to create bioweapons. Similarly, procuring strains, storing cultures and scaling up production are not just difficult, but are likely to set off warning bells in various federal agencies. Third, understanding how to properly disperse the weapon requires careful preparation and planning, serving as a final impediment to non-state bioterrorists.

Kofi Annan, former secretary general of the United Nations, once stated that “the most important under-addressed threat relating to terrorism…is that of terrorists using a biological weapon.” The 2001 anthrax attacks, which began a week after 9/11, fomented fears about the possibility of bioterrorism. The difficulty today is distinguishing between threats that are inflated and threats that are credible. The United States’ intelligence and security agencies still actively monitor bioweapons threats, both domestic and overseas. While most reports have found that fears of bioweapons have been inflated and are often overstated, renewed tensions with Iran call for at least a reexamination of current threats.

While Iran’s nuclear program has received the lion’s share of news and analysis, U.S. government reports from the 1990s and 2000s indicate that Iran was, at least at that time, developing offensive bioweapons. A 2005 State Department report noted that “Iran has an offensive biological weapons program in violation of the BWC [Biological Weapons Convention].” More recent reports, however, including a 2011 report from the U.S. director of national intelligence were vaguer regarding whether Iran is still actively developing bioweapons. Furthermore, there have been few, if any, indications that Iran would consider aiding rogue groups with biological weapons that could backfire on Iran.

Ultimately, historical trends demonstrate that there have been highly infrequent uses of bioweapons in actual attacks. And while state actors like Iran, Syria and North Korea resuming bioweapons research and development programs, potentially under the guise of dual use research, would increase the total threat to the United States, it might be more likely that future attacks will be small-scale and homegrown. Finally, keeping the threat of bioterrorism in context is also important; the consequences of even a medium sized influenza outbreak rival those of a man-made biological attack. Even so, U.S. vigilance amongst increased tensions with states that have a history of pursuing biological weapons programs will be important to maintaining America’s national security.

Tyler Headley is a research assistant at New York University. He has previously been published in Foreign Affairs, The National Interest, and The Diplomat. This article is being republished due to reader interest.