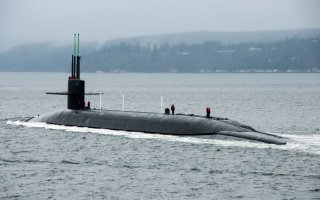 Here's What You Need to Know: This submarine is one of the most powerful to ever go under the waves.

The “Buckeye State” may be nearly 500 miles from the Atlantic Ocean, but ask any U.S. Navy submariner about the Ohio-class submarines and they'll tell you it is a platform that should strike fear into America's enemies. The submarine class that serves the Navy was developed as a virtually undetectable undersea launch platform to launch intercontinental missiles.

As the largest subs ever constructed for the U.S. Navy, and the third-largest submarines ever built, the boats were designed to carry the concurrently developed Trident submarine-launched ballistic missiles. A total of eighteen of the Ohio-class submarines were constructed by the Electric Boat Division of General Dynamics between 1981 and 1997.

According to the Strategic Arms Reduction Treaty (START II), which was agreed in June 1992, the number of U.S. Navy strategic missile submarines was limited to fourteen beginning in 2002. Rather than simply phasing out or decommissioning four of the boats, the U.S. Navy opted to convert them to conventionally armed nuclear-powered cruise missile-submarines (SSGNs).

Electric Boat was awarded a contract in September 2002 to convert the four oldest of the class including USS Ohio (SSBN 726), Michigan (727), Florida (728), and Georgia (729); and each of those boats was refitted with vertical launching systems, which allow the submarines to carry up to 154 Tomahawk TLAM (land attack) or Tactical Tomahawk (block IV) missiles. According to Naval-Technology, the conversion also allowed the subs to be capable of deploying special operations forces via accommodation of Northrop Grumman's advanced SEAL delivery system (ASDS), along with a mission control center. This was accomplished by converting two of the twenty-four vertical payload tubes into a lockout, which could be used by special operators such as the Navy SEALs.

The SSGN Program Office was able to refuel and convert the four ballistic missile subs (SSBN) to SSGNs in just over five years, and more importantly for U.S. taxpayers for considerably less cost and at less time than it would take to build a new platform. All four of the vessels had completed their conversion by December 2007.

Similar to the U.S. Navy's SSBNs, the four SSGNs now operate with two separate crews—a Blue and Gold crew. While most of the crew swaps are done in theater, the SSGNs are also based in their home ports of Kings Bay, Georgia and Bangor, Washington.  These four Ohio-class SSGNs operate on a fifteen-month cycle, which consists of a three-month major maintenance period followed by an entire year deployed overseas. As a result of this schedule, the SSGNs are in theater nearly seventy percent of the time.

As the SSGNs are nuclear-powered, these can operate undetected for extended periods, to deploy the special operators, or to launch its cruise missiles. However, unlike surface combatants, the SSGNs carry no defensive missiles.

While all four Ohio-class SSGNs will reach the end of their forty-two life cycle and are scheduled to be retired by 2028 without replacement, the Navy has been working to add the Virginia Payload Module, which contains four large vertical payload tubes, to future Virginia-class submarines beginning with the Block V submarines.

Yet, even with their retirement not all that many years away, the U.S. Navy could look to expand the capabilities of the SSGNs. In December 2020, noted naval expert H I Sutton, writing for Naval News, reported that the four aging boats could soon receive hypersonic missiles to increase the submarines' capabilities. For the time those SSGNs have left, they could remain a major offensive weapons platform.