How Turkey Brought Down its Own Air Force 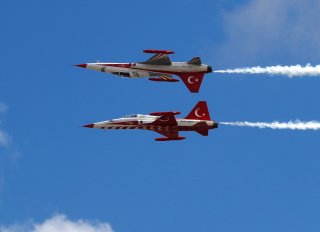 Here's What You Need To Remember: Numerous senior and field-grade officers were purged. More than 300 F-16 pilots were dismissed. This defanged the Turkish military as a political threat, and strengthened the increasingly authoritarian rule of Erdogan and his neo-Ottoman Justice and Development Party, which has imprisoned many journalists. But it left a gaping question: who would be left to fly Turkey's jet fighters?

Michael Peck, a frequent contributor to TNI, is a defense and historical writer based in Oregon. His work has appeared in Foreign Policy, WarIsBoring and many other fine publications. He can be found on Twitter and Facebook. This piece was originally featured in 2018 and is being republished due to reader's interest.