How the United States Plans to Counter China's Growing Military 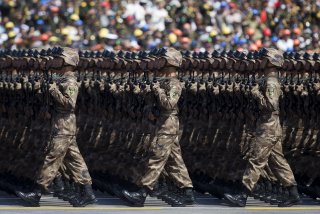 “We’re outnumbered” ... is the way Air Force Chief of Staff Charles Brown described the evolving global threat circumstance, making the point that China will have a much greater number of war platforms than the U.S. in coming years.

Brown, a former Pacific Air Force commander, told an audience at the 2021 Air Force Association Symposium that he often tells his force about the fast-growing threat presented by China.

“You know, as the PACAF commander, one of the things I would show was a slide that showed the comparison between the number of platforms China would have in 2025, the number of platforms the U.S. and our allies and partners in the region would have by 2025. We’re outnumbered. But it’s not about the platforms. It’s about the capabilities,” Brown said, according to a transcript text of his remarks.

China’s Navy is already larger than the U.S. Navy, a circumstance which of course informs the current Navy plan to massively expand its fleet. China is building its third and fourth aircraft carriers, doubling its number of destroyers in coming years and quickly adding large numbers of new amphibious assault ships and nuclear-armed submarines.

Interestingly, the GlobalFirepower 2021 rankings show large rises in Chinese air, land and sea forces. While the U.S.' total number of fighter aircraft, according to the assets, is 1,958 compared to China's 1,200, this balance of power in the air may not exist for much longer. On the ground and in the ocean, however, China far already far outnumbers the U.S. in sheer size. GlobalFirepower lists China as now having more than 2,185,000 active duty personnel, nearly double the U.S. number at 1.4 million. At sea, China is also reported to nearly double the U.S. in terms of overall numbers. Their Naval forces are listed as having 777 platforms, compared with 490 for the U.S.

This circumstance, according to Brown’s thinking, drives a compelling need for several key things such as an extensive intelligence gathering such as new knowledge of Chinese systems, technologies and platforms as well as accelerated U.S. Air Force innovation and modernization.

“The key aspect for us is we’ve got to be thinking ahead of where Russia and China may be going, so we can put things in place to allow us a better chance to compete, versus being reactive after it’s already happened, and then figuring out what we’re going to do, because they’ve already moved on to the next event. We’ve got to stay one step ahead of them,” Brown said.

The intention here is clearly to develop technologically superior weapons and platforms so as to mitigate a force size deficit, an approach will likely prioritizes new innovations in the area of AI, stealth and, perhaps of greatest significance, range. Should U.S. weapons and sensors have the technological capacity to “out range” Chinese systems, then attacking forces can achieve a massive impact with fewer numbers of platforms. This is part of why the U.S. Air Force is so heavily focused upon Joint All Domain Command and Control as a way to extend the battlefield through multi-node, cross-domain information sharing and targeting.

While Brown made a point to mention both Russia and China, as both are considered major power rivals, many Pentagon leaders such as Defense Secretary Lloyd Austin refer to China as the primary “pacing threat.”