How the Unraveling Economy Threatens Couples 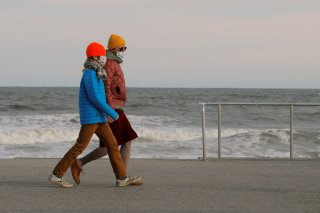 Social distancing and lockdown mean that many couples are now spending too much time with each other – and not enough time apart. As couples struggle to provide and care for children, the basic rhythm of everyday life has been turned upside down – conditions which have undoubtedly put couples under enormous strain.

But relationships are not only being challenged by new social arrangements. They are also under pressure from immense economic uncertainty. In the past few weeks, more than a million people have applied for the universal credit benefit in the UK. This increase in unemployment will have severe consequences.

Our recent research shows that even under normal circumstances, unemployment is associated with lower relationship happiness. We studied British heterosexual couples over a period of eight years and found that those experiencing unemployment, or whose partner is unemployed, tend to be significantly less happy with the relationship.

These problems become worse the longer they are out of work. It is not just the immediate impact of losing a job, but also the long term economic and psychological hardship that couples face. The current economic crisis will have far reaching implications for millions of couples.

Women especially are less happy with their relationship when their partner is unemployed. But the opposite is not true: women’s unemployment does not seem to affect men’s relationship happiness.

Women were also less happy with their relationship when their partner experienced unemployment in the last two years even if the partner had returned to work. This indicates that men’s unemployment can have a long-term effect, even “scarring” the female partner’s opinion of the relationship.

These findings highlight the gendered nature of relationships and employment among British couples. Although attitudes have changed in recent decades, many people continue to think that it is a man’s responsibility to be the main provider.

At the same time, women, particularly mothers, are often expected to stay at home or work part time. This traditional pattern may explain why men’s unemployment affects how happy women are in relationships but not vice versa.

Our report from the Centre for Population Change indicates that cohabiting partnerships have also become less stable. Although the majority of couples start living together without being married, more and more couples are using cohabitation as a testing ground and then split up if the relationship doesn’t work out.

As our report states, in previous decades, more than half of cohabiting couples would have married within five years. Today, only about a third marry, a third separate, and another third stay within cohabitation. Within 10 years of moving in together, about 40% of cohabiting couples separate.

Even when couples have children, unmarried couples have a higher chance of breaking up than married ones. Among all separating couples (both married and cohabiting), the proportion who weren’t married increased dramatically to about 74% in 2009. In fact, the vast majority of breakups involving children in recent years has occurred among cohabitees instead of married couples. This is partly caused by the greater economic problems among the unmarried.

Despite the increase in parental separation among non-married couples, cohabitation law in England and Wales has not kept up. There is no such thing as a “common law marriage”, and cohabiting couples do not have the same rights as married couples (Scotland changed its law in 2006). For example, cohabitees do not have the same access to courts when separating, or the legal right to inheritance when one partner dies.

This lack of legal protection can put an extra strain on separating couples. Given that they are said to be a priority for the British governmnt, policy makers should recognise that cohabiting couples are often more fragile and recognise them in law.

Taken together, less stable partnerships and deepening economic uncertainty will result in a surge in vulnerable relationships. As the coronavirus crisis puts more families under strain, government policies need to recognise the impact of unemployment on couples’ relationships.

And although the government is racing to provide financial assistance to struggling families, they should eventually put in place measures to socially support couples. For instance, they could provide additional support to cohabiting couples, who may not have the same access to resources when separating, and funding could be directed to counselling programmes that target the unemployed and their spouses. Such assistance may help to alleviate some of the profound social consequences of the coronavirus pandemic.